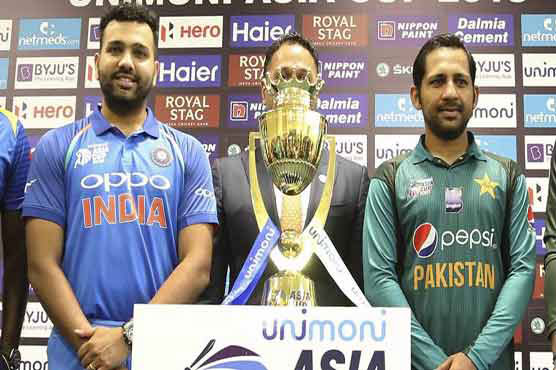 ABU DHABI (DNA) – Pakistan will take on arch-rivals India in their much-awaited clash in the Asia Cup 2018 at Dubai International Cricket Stadium in Dubai (Wednesday).Both India and Pakistan have already qualified for the Super Four stage of Asia Cup 2018 from Group A.

Millions of fans, across the border and elsewhere in the world, will be watching the Group A clash between Pakistan and India, with a sold out 25,000-crowd expected at Dubai Stadium.

The game is also the first between the sub-continent rivals since Pakistan thumped India by 180 runs in the final of the Champions Trophy at The Oval in June last year.

The two teams are facing each other for the first time in the United Arab Emirates since 2006, the last of their regular matches which were also held in Sharjah between 1984-2000.

Sarfraz, who led Pakistan in that memorable Champions Trophy triumph, denied that his team will have a psychological advantage.

“We will not take that Champions Trophy win in our minds,” said Sarfraz on Monday, a day after his team thumped qualifiers Hong Kong in their first match of the tournament.

“That was a different atmosphere (in London) and conditions. It was a year ago so that s history so we will enter the ground with a new strategy and passion.”

India will also meet Hong Kong in Dubai on Tuesday to tune up for the big match.

India s regular captain and world-class batsman Virat Kohli has been rested for the competition to help his aching back after a gruelling tour of England.

But Sarfraz refused to accept Kohli s absence will make much difference.