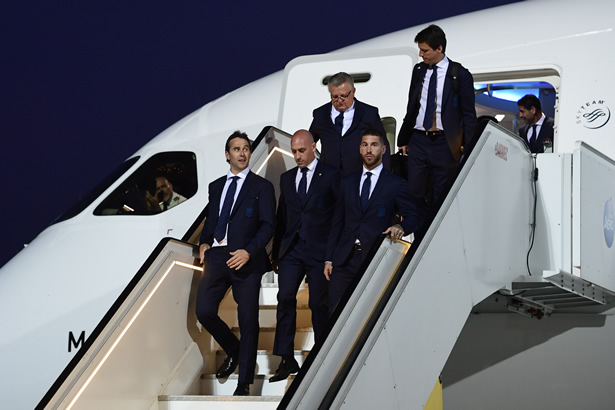 MOSCOW, (DNA) – Former World Cup winners Spain and debutant Panama arrived in Russia for the 21st edition of the global football spectacle.The pair and Saudi Arabia complete a trio of teams to have made it to Russia one week before next Thursday’s kickoff in Moscow.Spain won the World Cup in 2010 and are one of the tournament’s favourites. They remain unbeaten in 19 matches under coach Julen Lopetegui, who took over the reins following the 2016 Euros.

Spain were seen off personally by King Filipe VI and will play their final warm-up against Tunisia on Saturday by their base camp in the southern city of Krasnodar.

The Spaniards launch their campaign with one of the more anticipated group stage matches — a June 15 clash against Iberian rivals Portugal in the 2014 Winter Olympics host city Sochi.

The winner will be in pole position to come out on top in a Group B that also includes Morocco and Iran.

Panama snuck past the United States and Honduras to clinch their first World Cup appearance on a dramatic last day of qualifiers in the CONCACAF region.

Panama will have to score more upsets to progress in a Group G that includes Belgium and England as well a highly touted Tunisia side now ranked 14 by FIFA.

The Central Americans’ preparations ended on a sour note in Oslo on Wednesday: they lost 1-0 and saw their hotel rooms get robbed during the game.