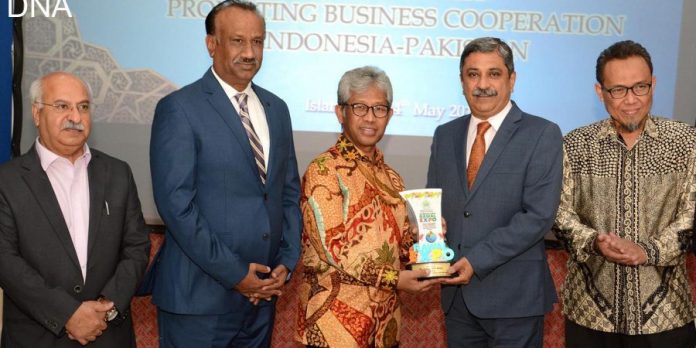 ISLAMABAD, MAY 25 (DNA) – Ambassador of Indonesia Iwan Suyudhie Amri has said relations between Indonesia and Pakistan are touching new horizons adding bilateral relations have seen marked improvement in all fields during the last couple of years.He expressed these views while speaking at an Iftar reception held for the business community of Pakistan. Businessmen from various cities of Pakistan attended the reception.

Ambassador Amri further said during last few years cooperation between the two friendly counties has increased manifold especially in the field of business, economy and above all military cooperation.

The ambassador noted with satisfaction that relations between the two countries were heading in the right direction and hoped in coming days these relations would get a further boost.

He also praised efforts of the Pakistani businessmen for contributing greatly towards strengthening of bilateral relations. The ambassador expressed the hope the business community shall continue playing pro-active role even in the prospect.

The Indonesian ambassador while talking to DNA news agency told that Indonesia will host a grand business expo in October this year in which over 28,000 visitors both from home and abroad are expected to show up.

For the past few years Indonesia has achieved a positive trend of export growth in a variety of products and services to the global market, which has to be both maintained and improved further because Indonesia is competing with other countries in exploring global opportunities.

Indonesia is giving free visa o 174 countries for a 30-day visit to those visitors who shall be in possession of valid passport for at least six months from the date of arrival.

The Indonesian embassies and consulates have already been informed and directed to ensure proper facilitation of visitors.

It may be mentioned also that Trade Expo Indonesia is one of the biggest business to business export product exhibition in Asia, showing a lot of Indonesian premium export products and services.

Besides, the expo shall provide an excellent networking experience that gives visitors an opportunity of meeting with high rank government officials and business leaders.=DNA