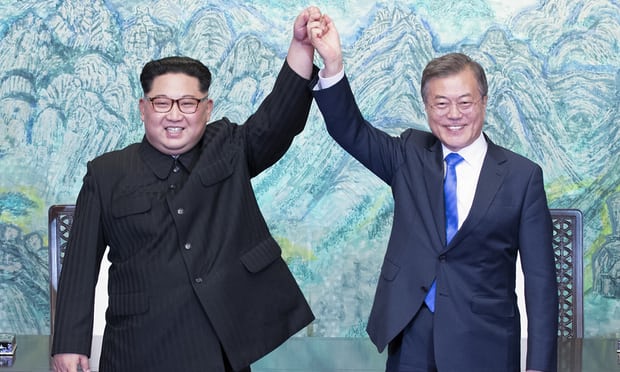 At 5 am, Pakistan local time, of April 27th, I was already awake. Being surprised and awed, I watched the young North Korean leader, Kim Jong Un, shake hands with South Korean President Moon Jae-in and cross the Military Demarcation Line. I believe, just as I did, all the world including 80 million Korean people may have been touched and thrilled by the historic inter-Korea summit meeting at the truce village of Panmunjeom.

It was the first time in almost 6.5 decades the North Korean leader set his foot on the South Korean soil. One of the most fascinating scenes was of the two leaders walking along Foot Bridge, sitting on a bench at the end and talking privately, with cameras filming from far away, only picking up sounds of wind and birds.

After the one-day-long summit meeting, the two leaders signed the Panmunjeom Declaration , in which they declared “no more war on the Korean Peninsula” and “a new era of peace” . The South and North Korea agreed to completely cease all hostile acts against each other, to pursue a nuclear-free Korean Peninsula through complete denuclearization, to turn armistice into a peace treaty, to establish joint liaison office in Gaeseong and to encourage more cooperation, exchanges, visits and contacts at all levels, to take only several points. Unquestionably, it was president Moon Jae-in who convinced North Korean leader Kim Jong Un to his strategic determination of coming to a dialogue with South Korea and the United States.

But who exactly is president Moon, peacemaker? He was born into a North Korean refugee parent. They were among the refugees aboard the SS Meredith Victory, a US ship which evacuated 100,000 refugees from Hungnam during the Korean War.

Being a student protester he was jailed after taking part in pro-democracy rallies against the dictatorship in the 1970s. Then he became a human right lawyer. Last year he was elected as new Korean president through the so called “candle revolution”. His leadership was based upon the people’s power which successfully achieved impeachment of the corrupt and incapable president Park without any blood-shed.

Foreign media appraised president Moon Jae-in as “a masterful dealmaker” (CNN), “the master tactician who could be bringing Trump and Kim to the summit table”(SCMP), “a leader who turned Trump’s North Korea policy upside down with a master class in diplomacy”(VOX) and more. Even before his inauguration, he advocated peaceful engagements with North Korea. As president he offered a peace overture in his speech in Berlin last July. President Moon capitalized on the Pyeongchang Winter

Now we are expecting another summit meeting between the United States and North Korea in May. Before and at the US-North Korea summit, president Moon has been and will play very constructive mediating roles between the two leaders. We are really looking forward to seeing the summit meetings lead to complete denuclearization, ushering in reconciliation, ever-lasting peace, stability on the Korean Peninsula and co-prosperity of the Korean people as a whole.

The writer is Mr. Sung-kyu Kwak, Ambassador of the Republic of Korea.