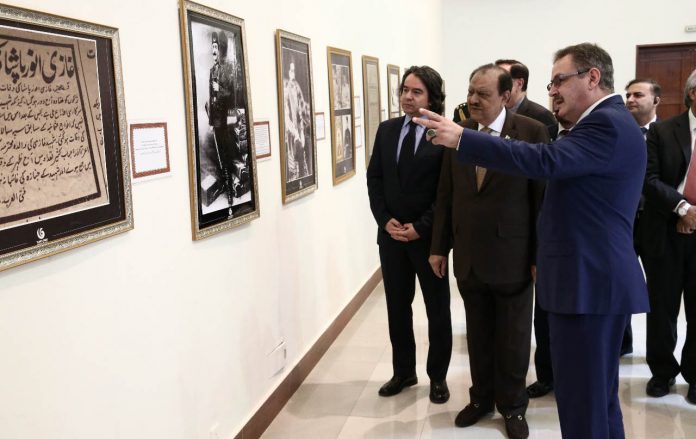 –              Opens photographic exhibition at PNCA; exhibition to continue till 20th of April; Turkish ambassador also speaks on the occasion

ISLAMABAD, APR 14 (DNA) – President of Pakistan Mamnoon Hussain has said relations between Pakistan and Turkey are from cordial to excellent adding these relations have further been strengthened over the years. The President was speaking on the occasion of launching of photo exhibition “Journey of Friendship and Brotherhood- A pictorial survey of Turkey-Pakistan relations”, at Pakistan National Council of the Arts (PNCA). The Turkey embassy and Yunus Emre Turkish Cultural Centre jointly organized the exhibition.

President Mamnoon Hussain also gave a historical perspective of relations between the two countries and highlighted role of various leaders who had contributed towards further strengthening of these relations.

The President also recited some poetry to delineate depth of relations between Pakistan and Turkey and received huge applause from the audience.

Ambassador of Turkey Ihsan Mustafa Yurdakul in his speech said last year they celebrated the 70th anniversary of the establishment of diplomatic relations between Turkey and Pakistan which we have adequately enjoyed ever since Pakistan attained its well deserved seat among the world family of nations.

He said, although official ties between the two countries were established in 1947, the foundation of the bonds that tie our two peoples in everlasting fraternity date far back towards centuries in history. They were amalgamated through our similar social values and beloved religion into a cultural fabric. This admirable legacy is a source of price for us, he added.

Ambassador Ihsan Mustafa further said roots of relations between Turkish and Pakistani peoples symbolize a unique interaction and stand out as a n unequivocal common voice.

“Although not widely known some sources indicate that the Muslim rulers in the Subcontinent sent congratulatory letters to the Ottoman Sultan Mehmed II , following the Fetih of Istanbul and exchanged correspondence.

Hence the mere fact of Istanbul’s feth can be singled out as a sign of immemorial alignment and unity between our nations.

He said “we have never forgotten the generous hand lent by our brothers, our ancestors in the darkest days of Ottoman Empire. They spared no efforts from providing support to our Nation in our days ofrodeal at earty 20th century.

“ All in all, if you are award of the deep historical and cultural ties between Turkish and Pakistani people, you would understand that there is very few pair of nations that enjoy relations as unique and affinity and connection as peerless as those between Turkey and Pakistan, he added.

The Turkish ambassador said, he attached great importance to the Exhibition, humbly displaying some landmarks of this journey of friendship and brotherhood, between Turkey and Pakistan.

“ Various pictures and photos of the different personalities and events, duly drawn or shot in the course of past centuries, shed light on the long lasting relations of fraternity and solidarity”

He said, history and common destiny bind us together. “We are neighbors without physical borders.=DNA