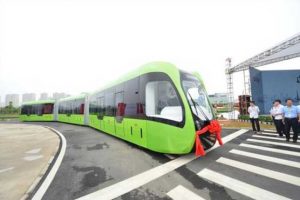 BEIJING, JUN 04 (DNA) – A Chinese railcar-maker has unveiled a new product called Autonomous Rail Transit (ART) in Zhuzhou, Hunan province of China, and the bus-rail combo rapid transit system is expected to speed up city’s public transportation. According to the railcar-maker CRRC, the ART uses rubber wheels on a plastic core instead of steel wheels. It’s also equipped with the company’s copyrighted technology to automatically guide the vehicles. It carries the advantages of both rail and bus transit systems and is agile and non-polluting.

The CRRC began designing the ART system in 2013. The first ART car is 31 meters in length, with a maximum passenger load of 307 people or 48 tons. Its top speed is 70 kilometers per hour, and it can travel 25 kilometers in distance after 10 minutes of charging.

The world’s first ART line will be launched in Zhuzhou, with a total length of 6.5 kilometers. Upon completion, it will be able to dock with the city’s mid-low speed maglev train.=DNA