Suicide bombers have targeted the Indian consulate in the eastern Afghan city of Jalalabad, killing at least nine civilians. Three bombers drove up in a car before detonating their explosives, police said. Gunfire was heard for an hour after the blast which took place at 10:00 local time (06:30 GMT). Most of the victims were from a nearby mosque. Indian officials say none of their citizens were hurt. At least 23 people, among them children, were injured in the Jalalabad attack, according to the police. Deputy police chief of Nangarhar province Masum Khan Hashimi said the blast, close to a mosque, had been a failed attempt to attack the Indian consulate. Also, an eyewitness told the BBC that one of the suspected bombers asked him directions to the consulate immediately before the attack. Mr Hashimi said two of the attackers wearing vests laden with explosives got out of the car and were immediately fired upon by police.

The remaining occupant of the car then blew it up, he told Reuters news agency.

A large crater was visible in the road after the explosion, which heavily damaged houses and local shops.

It is not clear who was behind the attack. Jalalabad has frequently been the target of militant attacks, including a bomb blast at the airport last year.

In May, offices of the International Committee of the Red Cross were hit, killing an Afghan guard, and in March several police died in a suicide attack on a police station in the city.

However, a Taliban spokesman denied responsibility for Saturday’s attack.

“Our fighters have not carried out any attack in Jalalabad,” Taliban spokesman Zabihullah Mujahid told AFP news agency.

Indian buildings in Afghanistan have been targeted before. 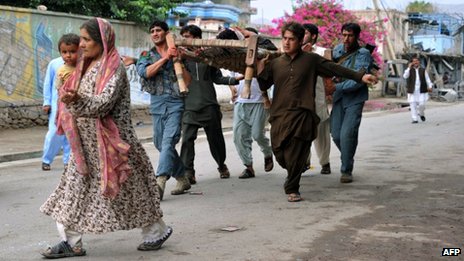 Most of the casualties from the suicide attack were civilians

In 2008 and 2009, the Indian embassy in Kabul was attacked twice with dozens of people killed.

The attack came after officials on Friday reported fierce fighting between security forces and militants in the Shirzad district of Nangarhar province.

They said 76 Taliban members and 22 police were killed in a series of clashes.