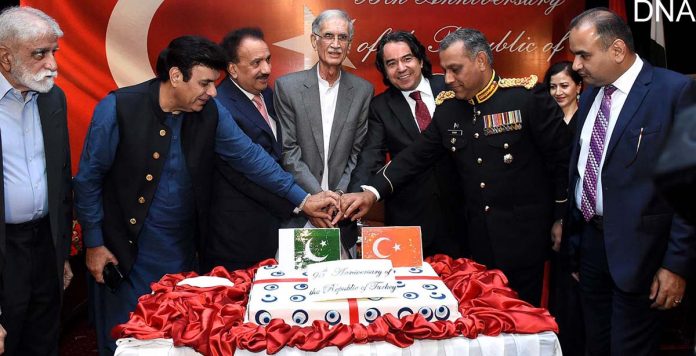 ISLAMABAD, OCT 30 (DNA) – Ambassador Turkey Ihsan Mustafa Yurdakul has said he is celebrating the 29 October Republic Day of our citizens who live in our country and abroad, as well as all our friends accompanying us on this day which is source of joy and pride.

He said relations between Turkey and Pakistan are time tested adding these relations are constantly on the move with each passing day.

The Turkish ambassador made these remarks on the occasion of Republic Day of Turkey. A large number of guests from different walks of life attended the reception.

The ambassador said, at the 95th anniversary of the proclamation of our Republic, I commemorate all our heroes, in particular Ghazi Mustafa Kemal Atatürk, leading our victory on the War of Liberation and the foundation of our new state.

He expressed gratitude to Members of Parliament making efforts for the liberation, development, growth and strengthening of our country as the representatives of our national will, since the First Assembly up until now.

The ambassador said that sacred memory of the members of our security forces and citizens who lost their lives during the fight against terrorism and on July 15th will forever remain in our nation’s heart and maintain their place in the identity of our state.

“I see each step we have taken towards an advanced democracy and a strong economy in our efforts to carry our country “beyond the level of contemporary civilizations” as a light kindled for our glorious future. Our new airport, which we are inaugurating today in İstanbul, is one of these lights’.

Each success of Turkey also nurtures, boosts and catalyses the hopes in the hearts of the oppressed and victims in our region and all over the world, as well as in the common conscience of mankind.

For this reason, our country ranks first in humanitarian assistance relative to its national income, although it is the world’s 17th biggest economy.

It is quite an honour for us to make history as a nation that shares its home and bread with the oppressed, instead of turning its back on them, and always makes its choices in favour of equity and justice, he added.

“We will continue working with all our strength for the Republic of Turkey to stand forever, as we reach the 95th anniversary of its foundation. With these thoughts, I celebrate once again our 29 October Republic Day.”

Bearing in mind that you have time and again heard the depth and importance of the bond between Turks and Pakistanis from myself, I thought that this time it should be the representatives of brothers and sisters of this country who should be speaking tonight. Nevertheless, being the Turkish Ambassador in Pakistan is both a blessing and a competition.

It is a competition because yesterday, today and tomorrow, you have approximately 210 million other Ambassadors in this country who were, who are and who will always be there to stand for this eternal bond and fraternity between our nations.

He described the nature of relations between Turkey and Pakistan with a metaphor: When you occasionally have to leave the place where you live for any reason, your options to whom to give the key to look after your place are obvious: either your relatives, or your friends or your neighbours.

There is not an obvious order between those three, you go for the option where you feel most secure and comfortable. For us, the Turks, that option is time-tested, signed and sealed by each and every respective citizen and thus obvious: Pakistan. =DNA