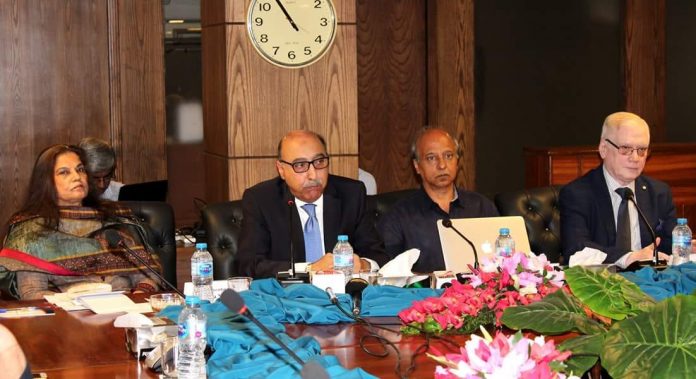 ISLAMABAD, AUG 29 (DNA) -It is vital to turn Pakistan’s strategic location from being a liability to a major driver of the country’s economic uplift by overcoming political expediencies.The Government of Pakistan needs to remove the choke points at Gwadar (Balochistan) by taking the Baloch and Iranians into confidence on the mutual use of Chabahar and Gwadar Ports.

The United States (US) and India are uncomfortable with the Belt and Road Initiative (BRI) and the China Pakistan Economic Corridor (CPEC), hence, spreading misperceptions and propaganda, especially against CPEC to subvert the projects and foment political instability in Pakistan.

These views were expressed by experts during ac conference arranged by IPRI.

Ambassador (R) Tajammul Altaf in his presentation on ‘Pakistan-China Relations in the Perspective of CPEC Strategic Partnership’ provided a brief overview of China’s economic and political history from 221 BC when it emerged as a unified state to the modern-day vision of President Xi Jinping to make his country a number one economic power by 2030 and military power by 2050.

Ambassador Altaf explained that Pakistan considers its friendship with China the ‘cornerstone of its foreign policy’ since it is a friendship which has stood the test of time. ‘Both countries enjoy very close people-to-people, friendly, friction- free, robust, unique and pragmatic relations,’ he said.

Ambassador (R) Fauzia Nasreen gave a comprehensive presentation on ‘Pakistan’s Relations with Russia’. She said that in an asymmetrical world order, Russia’s demand for recognition is very important.

It is because of this need for recognition that the country has had a role in a series of events starting from Georgia in 2008, Ukraine in 2013 and Syria in 2015. Following the Ukraine crisis, sanctions were imposed on Russia.

This is the time when Russia moved closer to Asia under its new foreign policy. Discussing the Shanghai Cooperation Organisation (SCO), Ambassador Nasreen outlined that Russia is attaching greater importance to this platform under which member countries can deal with terrorism issues. According to her, connectivity is also vital for Kremlin under CPEC and the BRI, through the Eurasia Economic Union.

Discussing ‘Pakistan’s Relationship with the US’, Mr Imtiaz Gul, Executive Director, Center for Research and Security Studies (CRSS),said US’ super power status has led to arrogance.

However, Washington has lost whatever leverage it had over Islamabad. Unfortunately, despite this, the world continues to view Pakistan through a US lens, which needs to be countered.

He said that US-India nexus has squeezed Pakistan in multiple ways especially with respect to Pakistan’s nuclear programme and its role in Afghanistan.

Earlier, Ambassador (R) Abdul Basit, President IPRI, in his opening remarks, said that IPRI has initiated these workshops for journalists to build the capacity of young media professionals, as well as polish the skills of veterans about Pakistan’s foreign relations and policies since there is a critical need to accelerate efforts to train the next generation of media leaders.

‘We live in a world of fast and dramatic global changes and in order to stay abreast of and understand the nuances of foreign policy changes, in-depth understanding of key issues and relationships is required.

I hope that such workshops will fast-track the transfer of knowledge and inspire and engage media professionals about Pakistan’s foreign policy issues,’ he said.=DNA