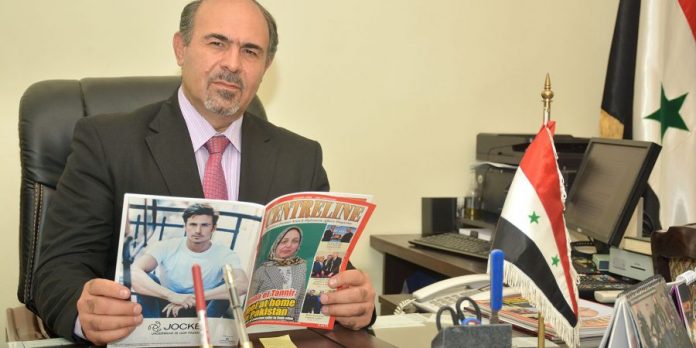 ISLAMABAD, JULY 16 (DNA) – Ambassador of Syria Radwan Loutfi has said  the conflict in Syria has been described by the West directly as a civil war between conflicting sects Sunni and Shia; therefore tens of thousands of foreign fighters have been recruited from more than 100 nationalities, and facilitated their move to Syria.

Thus, the United States and its allies sought to seize all the strings to oblige the Syrian government to surrender; including the exercise of different political pressures and economic blackmail against any country that could support Syria.

Ambassador of Syria expressed these views while giving an interview to DNA.

He said, every time the Syrian army achieves victory on the ground, some western countries raise their voices and intensify their movements in an attempt to change the track of events, by creating fake scenes of alleged use of toxic chemicals by Syrian army, to justify their aggression as happen recently by the tri-party aggression led by the US, UK and France against Syria under these accusations based on staged footage without any serious investigation.

However, they did not succeed, and they will never, because of the valiant resistance of the Syrian Arab Army supported by its loyal allies, who have changed significantly the balance of power and rules of engagement in favor of Syria.

The ambassador said, General Wesley Clark, a retired four-star general who was the Supreme Allied Commander of NATO during the Kosovo War, recounted he had a conversation with the Deputy Secretary of Defense Paul Wolfowitz in 1991, During that talk, the Secretary told him that the Pentagon had already drawn plans in order to achieve the change of regimes in Iraq, Syria and Iran. “…We’ve got about 5 or 10 years to clean up those old Soviet regimes before the next great superpower comes on to challenge us.”

Ever since the 2003 invasion of Iraq, the Bush administration has said that one of its key reasons for overthrowing Saddam Hussein was that an Iraq with a freely chosen, representative government could serve as a model for spreading democracy in the Middle East, he added.

In Syria, he said,  like few other Arab countries, domestic protests took place early in 2011, the government has reacted directly to meet the demands judged right, it abolished the emergency law and the state security court, the government passed a law regulating the right to peaceful demonstration.

However, the crisis was designed to ignore any positive effort, that’s why riots, killing of innocents on both sides, terrorizing the population, and sabotaging both public and private property have continued.

President Assad confirmed that any country has errors and mistakes, but the urgent need to correct them does not justify the spreading of chaos, the breaking of laws, and harming of public interests.

That’s how it was clear that Syria was facing a well-planned scenario to overthrow the state and to replace it with another, using the pretext of human rights and democracy.

Ambassador Loutfi said, that was already confirmed two years later by the former French Minister of Foreign affairs, Roland Dumas when he told a French television station that “Great Britain used to train and support Syrian rebels at least two years prior to the revolt aiming to overthrow president Assad from power|”.

To a question about role of external forces in Syria the ambassador said,  in fact, and as we have seen, the problem in Syria was not between the Syrians, but it was designed to look like that.

Soon after the eruption of demonstrations, Syria has noticed that the real target was to down the state with all tools.

To a yet another question about Golan heights issue he said, Syrian Golan is a region in the southwest of Syria; it has been occupied by Israelin June 1967. The U.N. has rejected this occupation.

We underline that Golan is Syrian and will return to Syria sooner or later, the ambassador concluded. =DNA