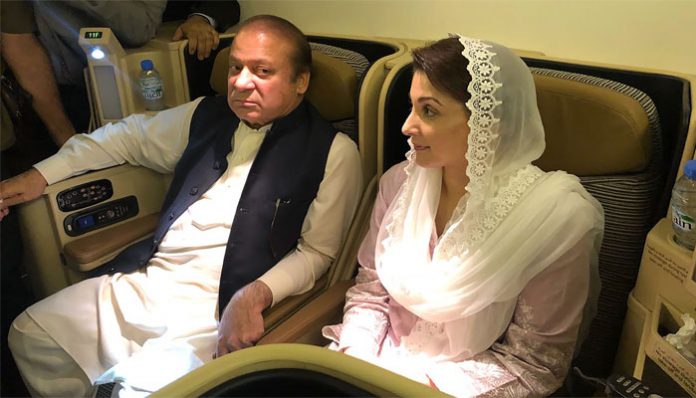 RAWALPINDI: (DNA) – The elderly mother of former prime minister and PML-N Quaid Muhammad Nawaz Sharif met him along with other family members at the Adiala Jail on Saturday.Begum Shamim was accompanied by son and former Punjab chief minister Shahbaz Sharif and grandsons Hamza Shahbaz and Salman Shahbaz.

The family reached Islamabad by a chartered aircraft from where they were taken to the Adiala Jail. She also met her granddaughter Maryam Nawaz and Captain (retd) Muhammad Safdar. With tearful eyes, she hugged Nawaz and Maryam, kissed them and patted their backs. The meeting held in a room adjacent to the office of the jail superintendent continued for over one hour.

Meanwhile, a copy of Holy Quran, praying mat, medicines, shaving cream, clothes, packets of cardamom, four towels and eatables were handed over to the three inmates. All these items packed in five bags were brought in a double cabin from the family’s Jati Umra estate, Lahore. Nawaz has been given B-Class while Maryam is kept at the vocational hostel.

According to jail sources, there’s a compound of B-Class housing six rooms with a badminton court and little lawn in the middle. Now the jail administration has divided this portion into two by erecting a wall in the center. Nawaz is kept in a room of the badminton court and Safdar in the second room.

Sources said a separate kitchen was also available in the B-Class where meal could be prepared on electric heaters. The prisoners can cook meal by getting dry ration and vegetables from the bazaar. A worker is also available for work.

The jail administration issued two pairs of prisoners’ dresses to Nawaz Sharif and Maryam. It was not confirmed if they had worn these dresses. Nawaz also met with his legal team.

He consulted with Khawaja Haris, Zafir Khan and Saad Hashmi in the presence of the jail superintendent. The meeting continued for five minutes.

According to sources, Nawaz complained about a lack of facilities and said there is only a mattress and a fan in the room while the washroom in the room was unclean.

In a letter released by her social media team, Maryam said she’d declined better facilities at the jail.

The letter, posted on a social media website, stated that Maryam was asked to submit an application to the jail superintendent for better facilities but she refused to avail herself of any of them. Maryam also made it clear that she did not make the decision under anyone’s pressure. Sources also said that PML-N leader Senator Chaudhry Tanvir had sent breakfast, lunch and dinner for Nawaz and Maryam.