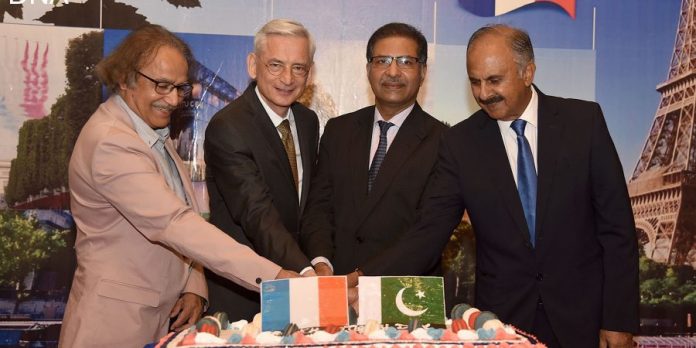 Speaking to an audience gathered at a hotel here to celebrate National Day of France, he said Pakistan was looking forward to boost cooperation with France in areas of climate change, water, energy and controlling of population.
Congratulating the people and government of France on their national day, he said, “We are so far apart geographically and culturally and language wise yet we are so close in so many ways.”

He said France and Pakistan had many things in common despite the differences in culture.
He said like France, Pakistan also believed in promoting common values and policies through multilateral platforms. He told that France was the first non-Muslim country to recognize Pakistan.

In Pakistan, he said framers of the constitution in their mind had three French principles of “liberty, equality and fraternity” and these principles were reflected in our constitution.

He said the French organization Alliance Francaise in Pakistan strengthened cultural exchanges between the two countries.

He thanked French government for supporting Pakistan when it was attacked by inhuman and savage terrorists. “I have received so many messages of support from the French people.”

Ambassador of France to Pakistan Dr Marc Barety asked the gathering to observe one minute silence for the persons killed in terrorist attacks in Pakistan.

He strongly condemned the terrorist attacks in Bannu, Peshawar and Mastung and paid tribute to Pakistani citizens for courageously exerting their democratic rights.

He said National Day of France called “Bastille Day” was commemorated on July 14 in celebration of unity of France after turmoil of the revolution.

The ambassador said various threats were looming large and peace was at risk in the world and everybody should get together, take collective action and forge cooperation to confront challenges.

The chief guest distributed prizes among winners of an art competition. National anthems of the two countries were also played and a cake was cut to celebrate the National Day at the event attended by prominent personalities from all walks of life.