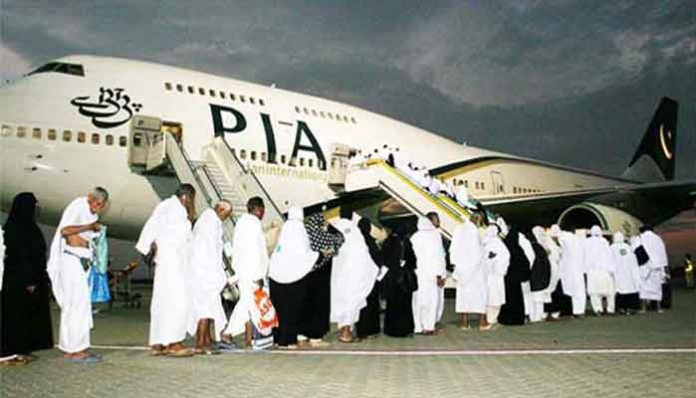 PESHAWAR, (DNA) – The crisis-hit Pakistan International Airlines (PIA) may suffer a huge loss due to ‘ill-planning’ of the management for the forthcoming Haj flight operation, sources said.The PIA did not acquire planes on lease for the Haj flight operation to be started shortly. “And now the national flag carrier is going to cancel/reschedule flights for Europe and this would cost millions of rupees,” a source told.

The source said this was the season for flights to Europe and cancelation of scheduled flights would cause losses to the national flag carrier which had already been suffering billions of rupees losses over the last several years.

They said usually the PIA acquired up to six planes for Haj flight operation but the management did not secure any additional plane on lease this time.

“The PIA has decided to drop three heavy-bodied passenger airplanes operating on routes to Europe for Haj flight operations which would cause huge loss to it,” the source added.

He said the decision would result in cancelation of flights to Birmingham, West Midlands, England, Oslo, capital of Norway, Barcelona in Spain and Milan in Italy.

The sources said that the decision would affect around 12,000 passengers who had already booked PIA tickets.

“These passengers would now turn to private airplanes operating between Europe and Pakistan and definitely would avoid using the PIA for their future air travel,” he added. The sources said currently only 26 out of total 33 PIA airplanes were operational. These included 10 Boing 777, nine Airbus 320 and seven ATR planes, adding two Boing 777 and two Airbus A-III and three ATR planes were grounded after developing technical fault.

Hidayatullah Khan, President of the People’s Unity which is presently the CBA in PIA, said the losses of national flag carrier had reached Rs45 billion and it used to be Rs33 billion previously.

He believed the PIA management was incompetent and had failed to chalk out any comprehensive plan for the Haj flight operations. He argued the plan to cancel scheduled flights to Europe would cause more losses to the PIA.

“The PIA management should have prepared a comprehensive plan for the Haj flight operation and secured the required planes on lease to continue its operation for Europe and also ensure smooth flight operation during Haj season,” he maintained. He said the top management was drawing huge monthly salaries but lacked the skills and expertise to run the affairs of the PIA.

The union leader demanded sacking of the chief executive officer and his team and appointing qualified people to revive the PIA and make it a profitable state entity once again. Mashood Tajwar, spokesperson for PIA, said no plane was dedicated for a particular route.

He said the PIA did not acquire any plane on lease as it was very costly. “Other airlines also have a very busy schedule nowadays and planes are not available on suitable rates. That is why we did not acquire planes on lease for the Haj flight operations,” he added.

The spokesperson said that the Haj operation would not affect the scheduled flights to Europe as they would reschedule and adjust such flights. “We have planned to utilise the gap between flights. Usually when a flight reaches its’ destination, it waits for few hours mostly up to five hours at the airport to take off on the return flight. We have planned to utilise this extra time between the flights and handle the Haj and flights operation to Europe at the same time,” he elaborated.

He said the PIA was working on the plan keeping in view the two operations. “We are making arrangements that none of the two operations are affected if a plane developed a fault and is grounded. We intended to ensure smooth flight operations,” he added.