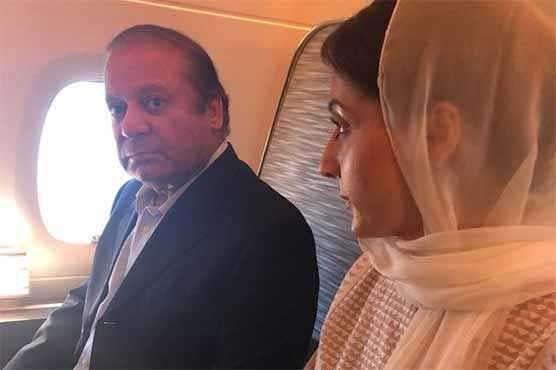 LAHORE, (DNA) – Former prime minister Nawaz Sharif and his daughter Maryam were still in Abu Dhabi Friday as their flight faced an unspecified delay.The PML-N supremo and his daughter had landed earlier in the day for a brief stay in Abu Dhabi. The reason for delay could not be ascertained.On the other hand, a team of National Accountability Bureau (NAB) has also reached Abu Dhabi to arrest Nawaz and Maryam.

NAB team will keep Nawaz and Maryam in Adiala Jail for one day and then will shift tem to Attock Fort.

As per details garnered, National Accountability Bureau (NAB) team headed by Amjad Ali, comprising 16 members including police women, is handed over the responsibility to arrest Nawaz and Maryam.

The arrangements for the shifting of the Avenfield reference convicts to Adiala jail through helicopter have been completed, while a letter has also been dispatched to accountability court (AC) judge Muhammad Bashir to reach Adiala jail on July 13.