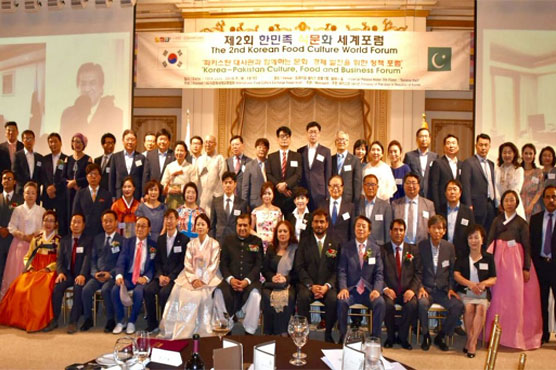 ISLAMABAD (DNA) – Embassy of Pakistan and International Food and Culture Exchange Association of Korea have co-hosted the first Pakistan-Korea Culture, Food and Business Forum in Seoul.Speaking at the event that was attended by more than 100 Korean businesses and dignitaries, Pakistan’s ambassador to South Korea, Rahim Hayat Qureshi, highlighted the shared similarities between Pakistan and Korea.

“Korea and Pakistan became independent shortly after the Second World War after a long period of colonial rule on August 15, 1945 and August 14, 1947 respectively”, he added.

He said these similarities between the countries also extend to the people and culture as both highly respect their elders and teachers, and enjoy great devotion to families, said a message received here on Wednesday.

He also highlighted that languages of both countries had the same sentence structure and many common words.

“Pakistan, with the sixth largest population in the world and 80 million people in the middle-class bracket, is an ideal destination for investment,” Qureshi said.

Speaking at the event, Congressman and Chairman Financial Committee, National Assembly of South Korea, Mr. Cho Kyung Tae appreciated the effort to bring Pakistani and Korean people closer to each other through food, culture and business.

“Pakistani food is delicious and its culture is rich. We are very proud of this collaboration with Embassy of Pakistan and would like to organize such more events for the benefit of the people of both countries,” said Ms. Ryoo, the Chairperson of International Food and Culture Exchange Association Korea.

There are more than 12000 Pakistanis in South Korea including businessmen, students and workers.

Embassy of Pakistan previously hosted a Gandhara exhibition in 2017 where it displayed more than 20 Buddhist artifacts from Taxila. The exhibition was viewed by more than 1,00,000 visitors.