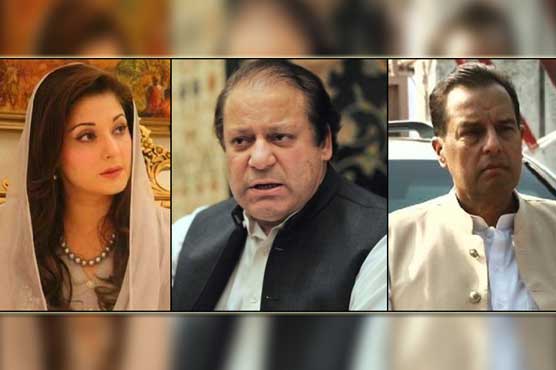 Sources privy to the anti-graft watchdog said that all out efforts would be made for the arrest of those convicted by the court.

The Bureau’s statement said that assets beyond income was also corruption, adding that the impression that they weren’t convicted for corruption in Avenfield reference was wrong.

The anti-graft agency added that warrant will be implemented according to law.

On the other hand, Nawaz Sharif, his daughter Maryam Nawaz and son-in-law Cpt (r) Safdar will challenge the Avenfield reference verdict in Islamabad High Court (IHC).

According to details, Khawaja Harris has prepared appeals against the accountability court’s decision. All the three accused have signed the affidavits.

Their lawyers have said that Nawaz and Maryam will face difficulty in receiving relief if did not return to Pakistan in 10 days.

On Friday, former prime minister Nawaz Sharif was convicted and sentenced to prison in absentia by the accountability court, in a verdict that is likely to further disrupt an already chaotic campaign for national elections this month.

The sentence, 10 years in prison and a fine of 8 million pounds, or $10.6 million, came almost a year after Supreme Court removed Sharif from office and less than five months after the court barred him from holding office for life.

The case stemmed from the Panama Papers leak that disclosed expensive and undeclared property owned by the Sharif family in London.

The verdict marked a further fall for the PML-N supremo, who has been Pakistan’s prime minister three times but never completed a term.

From the start of the ex-PM’s legal troubles in 2016, Sharif’s daughter Maryam Nawaz Sharif and her husband, Muhammad Safdar, were also convicted, with Maryam sentenced to seven years in prison and a fine of 2 million pounds and Safdar sentenced to one year in prison.

The court also ordered the seizure of the Sharif family’s four apartments at Avenfield House, a luxury building next to Hyde Park in London.