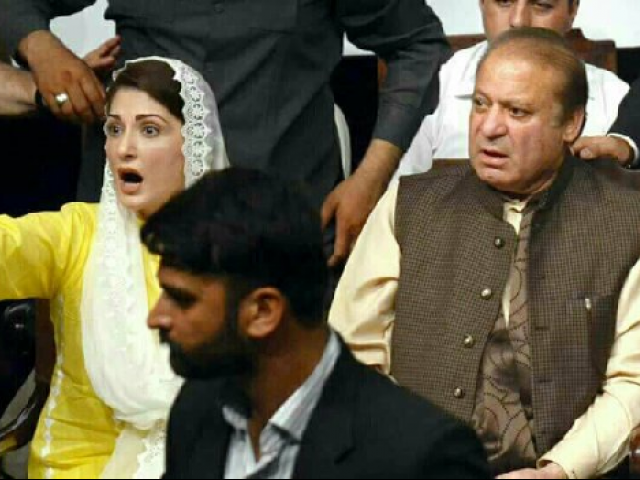 ISLAMABAD, JUL 06 (DNA).. Former prime minister of Pakistan Nawaz Sharif his daughter and son in  law  have been found guilty of Avenfield case and sentenced. The accountability court handed down this decision after a little delay. All the accused were not present in the court on the time of the verdict.

The judge earlier set 12:30 pm for the pronouncement of the verdict, but he deferred it till 3:00pm owing to Friday prayers’ break and again till 3:30 pm.

He earlier rejected an application filed by the former prime minister seeking a seven-day postponement of the verdict.

He earlier reserved the verdict on the application after hearing arguments from the Sharif family’s lawyer Amjad Pervez and NAB prosecutor Sardar Muzaffar.

At the outset of the hearing, the lawyer argued that the former premier and his daughter are not proclaimed offenders and added they will show up in court upon return from London after seven days.

Opposing the plea, the NAB prosecutor contended a reserved verdict is not deferred and pleaded that the application be dismissed for being non-maintainble.

Security has been beefed up in and outside the court to avoid any untoward incident.

The accountability judge had earlier set July 6 (today) for pronouncement of the verdict in the Avenfield case against Mr. Nawaz Sharif, his daughter Maryam Nawaz and son-in-law Captain retired Safdar.

A day earlier, the former premier’s lawyer filed the application, stating that the ex-PM wanted to hear the judgment while standing in the courtroom with his people whom he wanted to hold as witnesses.

He said Mr. Sharif and his daughter traveled to London on June 14 for tending to ailing wife Kulsoom Nawaz, who is undergoing cancer treatment there. Upon arrival in London, they discovered that she suffered a cardiac arrest and was put on a ventilator.

He said the former premier wanted to return to Pakistan if his wife had recovered sufficiently.

Not only is delay in the interest of justice, but in consonance with the spirit and requirement of Section 366 of the Code of Criminal Procedure, 1989, the counsel argued.

He pleaded that the announcement of the order in the reference be postponed for a minimum period of seven days so that Mr. Sharif and his daughter could return home.

A report about the condition of ailing Kulsoom Nawaz was also attached to the application, which stated, “she continues to be ventilator-dependent. Whilst last week it did look as if she might be able to [be] weaned, her respiratory indices deteriorated and she has required pressure control ventilation.”

On July 28, the apex court disqualified Mr. Sharif in a unanimous verdict, thus cutting short his third stint in power.

The court directed the anti-graft watchdog to file references against the former premier and members of his family in the wake of the Panama Joint Investigation Team (JIT) report leveling serious corruption allegations against them.

Subsequently, three references were filed against Sharifs, which pertained to the Al-Azizia Steel Mills and Hill Metal Establishment, Flagship Investment Ltd, and Avenfield properties of London.

Nawaz sharif and his two sons – Hussain and Hasan – have been named in all three references whereas his daughter Maryam and son-in-law Capt. Safdar have been nominated in the Avenfield reference only.

As per Avenfield Properties reference, Sharif, his brood and his son-in-law had purchased four flats in Park Lane, UK, without legitimate financial means. However, the former premier and his family members have consistently claimed that the apartments were purchased with legal means.