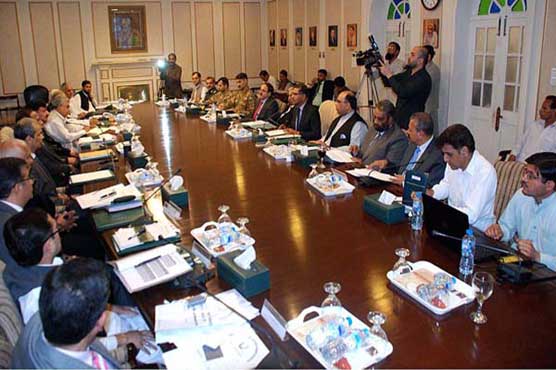 PESHAWAR, (DNA) :Caretaker Chief Minister of Khyber Pakhtunkhwa Justice (R) Dost Muhammad Khan and Caretaker Federal Minister for Information and Broadcasting Syed Ali Zafar on Wednesday had a detailed meeting on the FATA reforms and discussed the legal, administrative, the law and order situation, the security and developmental package for mainstreaming the tribal areas, the overall reconstruction and rehabilitation of newly merged districts into Khyber Pakhtunkhwa and the extension of different public sector institutions to the newly merged districts.

The meeting focused on the modus operandi for the extension of judiciary to the newly merged districts, the revival of economic activities, the establishment of public sector universities and colleges, the new system of governance to mitigate the sufferings of tribesmen, jobs for the jobless youth, the creation of divisional headquarters, district headquarters and the challenges posed by the emerging situation in the wake of merger and the exemption of taxes, both of federal and provincial governments. The chief minister said that the tribesmen faced the worst sort of devastation as the entire infrastructure was destroyed by the conflict and other calamities. His government wanted an interim relief on fast track tagged with quick implementation.

The federal government and the province have a shared responsibility for the overall recovery plan, both the reconstruction and rehabilitation of tribesmen, fearing that any delay would bring the worst kind of ramifications. ‘We cannot leave a legal vacuum nor can show any laxity as we have reached a volcanic situation created by the conflict,” he added.

Both parties agreed to an ordinance or notification by the federal government to remove the legal weaknesses in the law for the merger of new districts into Khyber Pakhtunkhwa. The process of implementation would take off soon after the ordinance.

The meeting recognized the sacrifices of armed forces and the people of the tribal areas for flushing out miscreants and terrorists from the newly created districts. The developmental package would facilitate the reconstruction and rehabilitation process.

The chief minister said that security measures were of importance in the areas because there were different stakeholders having different goals. He suggested the continuation of privileges to the Maliks and monthly stipend to the Khateeb. The political irritants should be taken care of politically. His caretaker setup wanted to work on war footings to install an infrastructure because it was destroyed by the conflict.

He suggested immediate financial injections in the tribal areas that will set the ball rolling. The federal government should immediately transfer the resources required for the reconstruction and rehabilitation process. He suggested ready-made shelters and houses for the homeless people. The chief minister said that the compensation and the infrastructure development should be strictly monitored in order to check any corruption in the whole process. He said his caretaker setup was going all out to attract the donors put their share in the overall reconstruction and rehabilitation plan for the newly merged districts, this would reduce the financial burden considerably.

He also suggested for psycho analysis of the tribesmen. Simultaneously the government would have to install a new look team with new and creative mindset for the mainstreaming of tribesmen. The old team cannot deliver, he added.

Dost Muhammad Khan also talked about the rich gas and oil deposits underlining the need for tapping them and exploiting them for the benefit of the newly merged districts that would not only open up a new era of development in the area but would also bring about prosperity in the whole of the country. The only thing needed was the initial investment.

Federal Minister for Information Ali Zafar agreed to the provincial government proposals for the immediate, short, mid and long term planning adding that the province had properly diagnosed the illness and the federal government would have to provide everything to facilitate the smooth transition of mainstreaming the tribal adding that the present caretaker setup would do everything in that regard.

The caretaker chief minister reminded the participants that at the moment there was no infrastructure, no judicial system, no administrative and governance structure and the government had to speed up its efforts to do everything to give relief to the people.

“The first thing should be to start economic activities that will create jobs for the jobless youth of merged districts. We have to ensure access to justice without any discrimination because these districts have become part of the province and the country and the people have all rights enjoyed by other citizens. The slow process will create a vacuum that would create multiple problems.”

Dost Muhammad Khan suggested extra security measures involving all the stakeholders to mitigate the sufferings of the tribesmen. This province was short of resources but the government would do whatever it could for the tribals. The creation of separate divisions for the newly merged districts would send a good message and they would start realizing that they were not controlled by others but they were the master of their own destiny.

He directed for the dairy and poultry development in those areas. “We have to give everything to the tribals to remove their deprivation and win them back. We have a long list of challenges but together we would overcome them.”

The federal minister said that the centre had a plan of hundred billion rupees for ten years for mainstreaming the tribal areas and undertaking developmental works in the new districts. Each year Rs 10 billion will flow to the KP.

The chief minister said the sooner the resources were transferred to the province for the rehabilitation and reconstruction, as the government had to bring the backward areas at par with the developed areas of the province.

He assured that he would sketch out a plan that would ensure rights of the deserving. “However, we have to work together and facilitate the transition.”