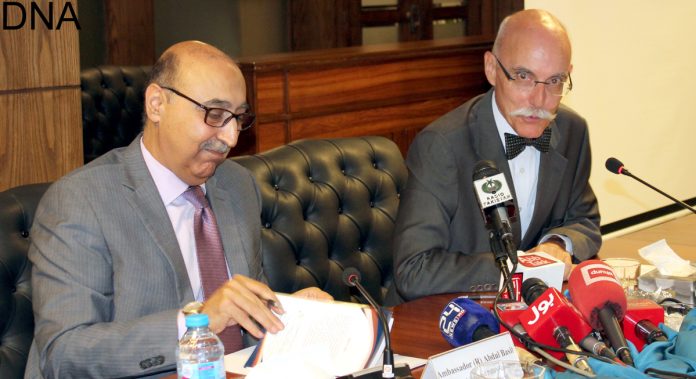 ISLAMABAD, JUL 04 (DNA) – Acknowledging the efforts made by Pakistan and its sacrifices to combat terrorism, H.E. Mr. Jean-Francois Cautain, Ambassador of the European Union to Pakistan, said that the EU commends Pakistan in its struggle to combat violent extremists and terrorism which is a challenge even for EU member countries.

He acknowledged that Pakistan has suffered from extremism more than any other country, and stressed that Pakistan and the EU need to work together to combat terrorism, both within and outside their borders for global peace and security.

The EU Ambassador pointed out that the EU is not just a trade organization or large development agency, as it is now significantly engaged in the area of security and defence as well. ‘Since 2003, the Common Security and Defence Policy has enabled the EU to take a leading role in peace-keeping operations, conflict prevention and in the strengthening of international security’, Mr Cautain shared during the first of the Ambassador Lecture Series on ‘EU-Pakistan Relations: Challenges and Opportunities’ organised by the Islamabad Policy Research Institute, here in Islamabad, today.

Briefly sharing the history and background of the European Union model, he explained that over the past two years, the EU member states have been focusing on defence and security since the EU’s model of economic integration is also a unique opportunity to support engagement in the field of defence and develop collective defence capabilities.

Outlining some of the key points of the 2016 ‘Global Strategy for the European Union’s Foreign and Security Policy’, Ambassador Cautain said that the strategy sets out the EU’s core interests and principles for engaging in the wider world and gives the Union a collective sense of direction. ‘Decisive steps are being taken on security and defence.

Building resilience at home and abroad means creating a more responsive union. The EU is also working to strengthen the resilience of states within and outside its borders by supporting good governance and accountable institutions.

The Ambassador lauded Pakistan’s efforts in terms of trade enhancement after the GSP Plus facility, and outlined that this was a win-win partnership.

‘Over the past 18 months, we have been working to finalise a new Engagement Plan to further deepen relations between Pakistan and Europe, and hope that a new agreement will be signed under the new government after Pakistan’s general elections.

The Engagement Plan is an opportunity for both sides to benefit from multifaceted cooperation ranging from trade to security to numerous other issues, including terrorism,’ he said. Mr Cautain discussed EU’s development cooperation in education, rural development and governance and said that the EU has decided to substantially increase the development cooperation funds allocated to Pakistan to 635 million EUR which is double when compared to the previous years.

He explained that ‘One-third of this goes to the education sector channeled through the government conditional upon the achievement of targets set by the government itself. Education is a big challenge for Pakistan, especially in Sindh, since enrollment rates over the past ten years have only increased by 1 per cent’, he remarked.

Discussing EU as one of the main trading partners of Pakistan accounting for the largest share of its global exports, he said that while EU member countries want to invest in ventures like the China-Pakistan Economic Corridor, ‘greater clarity and more information about CPEC’s long-term vision is required for this to happen.’ It is also vital to recognize that connectivity is not possible without regional stability, he said.

IPRI’s President Ambassador (R) Abdul Basit in his welcome address said that the European Union’s relationship with Pakistan is very important, not only politically but also economically. ‘Under the 2012 Five-Year Engagement Plan, this relationship has moved from strength-to-strength, with GSP Plus incentives helping Pakistan build its capacity in order to become a more effective and competitive partner in international commerce.

‘The EU will continue to be important for Pakistan despite UK’s exit since it has been a trailblazing organization, creating new templates for regional integration and connectivity.

We, in Pakistan can learn from the EU, especially in the context of CPEC, to understand how the incentive of regional economic integration can help resolve bilateral political disputes, eventually paving the way for viable cooperative, intra-regional and inter-regional structures,’ he said.

There were also questions about the Jammu and Kashmir dispute, especially about what the EU could do to help resolve the conflict.

The participants expected the EU to be more vocal against the ongoing oppression of Kashmiris. They also raised the issue of migration and how the EU could learn from Pakistan which has been hosting more than 3 million Afghan refuges for more than 38 years.

Mr Cautain agreed that the government of Pakistan had worked tirelessly for the Afghan refugees, but at the same time pointed out that repatriation could not be possible till Afghanistan becomes stable and peaceful.

The issue of third-generation Afghans born and raised in Pakistan is also a complex mater, he pointed out. On Pakistan-India relations, he said, ‘if Germany and France can work together after being at war for so many years, peace and rapprochement between Pakistan and India is also possible.’=DNA