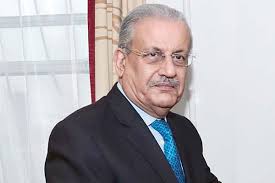 ISLAMABAD, JUL 02 (DNA) – Former Chairman Senate Mian Raza Rabbani has criticized the caretaker government for overstepping its mandate by agreeing to implement a plan given by Financial Action Task Force (FAFT).In a statement issued to media Monday, Rabbani said that the plan has bound the new government to commitments which need to be implemented within fifteen (15) months.

‘Such a major step which has financial, political and repercussions on national security should have been left to the new Parliament,’ he maintained.

At the end of Paris meet, FATF said: “It identified Pakistan as a jurisdiction with strategic AML/CFT deficiencies. The country has developed an action plan with the FATF to address the most serious deficiencies”.

Rabbani further stated that ‘it is unfortunate, that even though the Senate is functioning, the government has not taken the House into confidence’.

‘This issue will be raised in the upcoming session of the Senate and it would be than for the House to decide if it agrees with the conditionality that has been laid down by FATF,’ the PPP leader added.

On the issue of maintaining law and order during electioneering, Rabbani said the government is failing in its mandate given under the law and the constitution of assisting the Election Commission of Pakistan in holding free, fair and just elections.

‘It has failed to provide security and protection to candidates, it has further failed to define the role under which the armed forces of Pakistan have been called upon to assist the Returning Officers in the conduct of peaceful elections.’

On Sunday, the convoy of Chairman Pakistan Peoples’ Party Bilawal Bhutto was pelted with stones when he reached Lyari. Also, a PML-N candidate in Multan was beaten by officials of Agriculture Department of which the ECP took serious notice and sought report from the provincial administration.