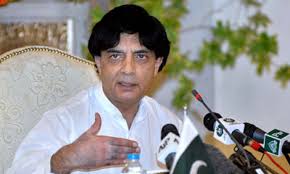 ISLAMABAD, (DNA) – Pakistan Muslim League Nawaz (PML-N) leader Chaudhry Nisar on Monday, once again exasperated over the issue of party ticket’s allotment.As per details garnered, Chaudhry Nisar was talking to media in Islamabad when he said that the party has allotted tickets to those who used abusive language and propaganda against PML-N supremo Nawaz Sharif.

He inquired where former Prime Minister Nawaz Sharif could not find me stalwart.

Earlier, on Saturday, the Election Commission of Pakistan (ECP) had allotted the symbol of ‘jeep’ to estranged PML-N leader Chaudhry Nisar.

His lawyer had submitted a plea to Returning Officer (RO) asking for the allotment of ‘jeep’ symbol to Nisar to contest election form NA-59 and 63 and Punjab assembly’s constituencies 10 and 12 as an independent candidate.