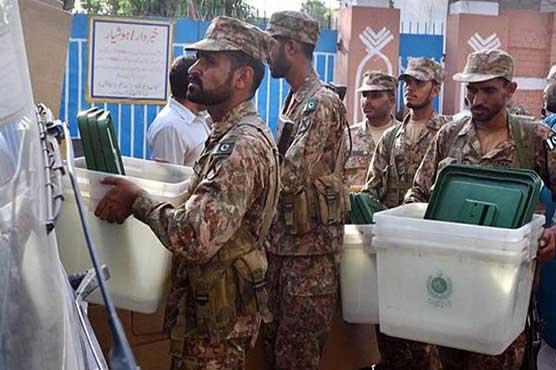 LAHORE, (DNA) – The local administration on Saturday has prepared a security plan for Lahore for upcoming general elections 2018.As many as 600 polling stations have been declared sensitive at which, more than 6000 army and Rangers personnel will be deployed to avoid any untoward situation.CCTV cameras will be placed at the polling stations while a monitoring room will also be established.

Earlier, Punjab government had imposed Section-144 across the province, banning assembly of four or more people outside the polling stations, unlawful use of loudspeakers and exhibition of arms.

The ban came into effect from Friday midnight and will remain valid till July 28. Legal action will be taken if anyone violates the ban. Section-144 has been imposed as a precautionary measure to maintain law and order situation during upcoming general election.

Section 144 of the Code of Criminal Procedure (CrPC) basically empowers district administration to issue orders in public interest that may place a ban on an activity for a specific period of time.

Such a ban is enforced by the police who register cases under section 188 of the Pakistan Penal Code for violations of the ban. Section 188 carries a maximum penalty of six months in prison or fine or both.