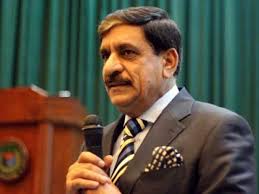 ISLAMABAD, (DNA) – Nasser Janjua, the National Security Adviser of Pakistan, tendered his resignation on Wednesday, which was readily accepted by the caretaker prime minister Nasirul Mulk.Janjua was appointed as the National Security Adviser (NSA) with the status of minister of state in 2015 by Pakistan Muslim League Nawaz regime. He had replaced Sartaj Aziz who was also the Adviser on Foreign Affairs and held the status of a federal minister.

He played a decisive role in eliminating the anti-state elements while working as Commander of Southern Command in Balochistan after joining the Command on 31 August, 2013 and he remained on the position till retirement.

Under the command of Lt. Gen. Nasir Janjua, Pakistan army carried out multiple successful operations against Baloch separatists, terrorists and other militant elements. Janua had also been appointed as President of National Defence University, Vice Chief of General Staff, Brigade Commander at Siachen and Company Commander at Military Academy Kakul.

He was also playing a pivotal role in the undergoing AfghanPeace process.