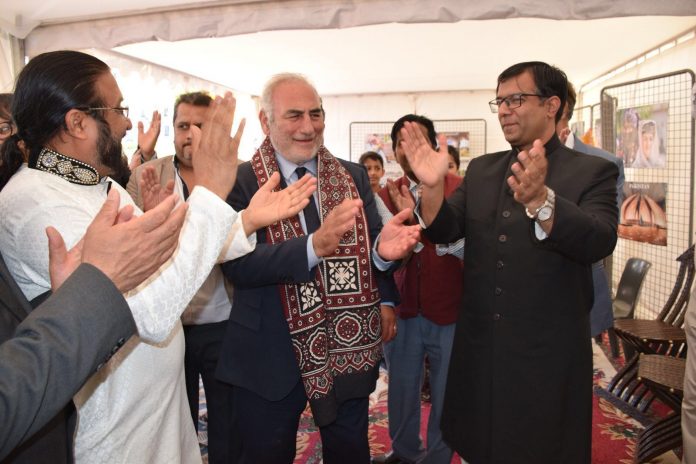 LYON, (DNA) – The colorful and tastefully decorated Pakistan Pavilion was thronged by hundreds of visitors at the Multicultural World village held in Lyon, the second largest city in the center of France.Mayor of Lyon, Mr. Georges Képénékian formally inaugurated the 3-day Festival in the presence of Ambassador of all the participating countries. Pakistan was represented by Mr. Qamar Bashir Press Counselor and Mr. Abbas Sarwar Qureshi, Head of Chancellery.

The Mayor of Lyon specially visited the Pakistan pavilion setup by the Embassy of Pakistan and the Pakistani community of Lyon and deeply appreciated the creatively decorated pavilion which was adorned with traditional art and crafts of Pakistan.

The visitors also watched with great interest documentaries depicting progress made by Pakistan in economics, manufacturing, infrastructure and defenec sectors and tourism opportunities of Pakistan.
A variety of Pakistan dishes were offered to visitors free of cost. Specially prepared touristic brochures in French language were also distributed amongst visitors.
The participation of Pakistan in the World Cultural Festival, Lyon was a part of the Public Diplomacy initiative launched by the Embassy in 2016 under the banner “Celebrating Pakistan” to introduce Pakistan’s rich cultural heritage, natural landscapes, archaeological treasures and tourist attractions in all major regions and cities of France.