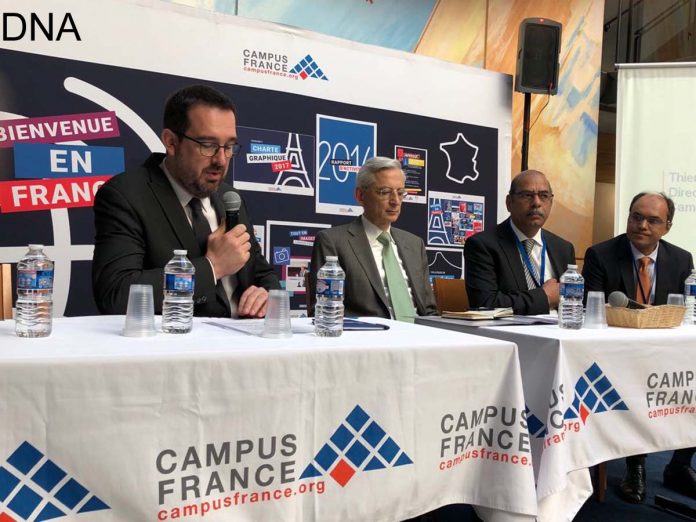 PARIS (DNA) – “Pakistan Day” a joint initiative of Higher Education of Pakistan (HEC) and its French counterpart campus France, was held in Paris.This is the third event of its kind, which is aimed at deepening cooperation in higher education between Pakistan and France.

Addressing the opening ceremony, Dr. Arshad Ali, the Executive Director of HEC while expressing satisfaction on on-going cooperation between HEC and campus France said that HEC was sending Pakistani scholars to leading French universities for Master’s and Doctorate degree programs. Under a special “Balochistan program”, deserving students of Balochistan are also being provided opportunities to receive higher education abroad.

Thierry Valentin, Executive Director of Campus France in his address recalled the visit of a 20-memebr delegation of France universities to Pakistan last year. He hoped that the continuous exchange of delegations in the field of higher education will further cement cooperation between the two countries in the higher education sector.

Mr. Marc Barety, Ambassador of France to Pakistan and Mr. Amjad Aziz Qazi, Charge d’Affairs of Pakistan also spoke on the occasion expressing full support of the two governments for strengthening cooperation in the field of education.

Earlier, the Ambassador of Pakistan to France Mr. Moin ul Haque hosted a dinner for the HEC’s delegation in Paris on 18th June, 2018, which also attended by senior French officials and scholars.

Dr. Arshad is leading a 14-member delegation of thirteen top universities of Pakistan for a week-long visit to France. During their stay, the delegation will visit Paris, Lyon and Grenoble to explore ways and means to further cement bilateral cooperation in the higher education sector.