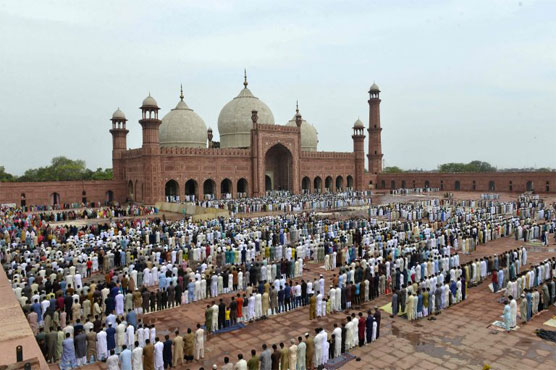 LAHORE, JUN 16 (DNA) – Eid-ul-Fitr is being celebrated throughout the country today (Saturday) with religious fervour and zeal.Eid congregations were held at open places‚ mosques and Eidgahs in all major cities, towns and villages of the country.In their sermons, Ulema and religious scholars highlighted the significance and philosophy of Eid-ul-Fitr and the need to share its joys with the poor.

In Lahore, the main Eid congregation was held at Badshahi Mosque where a large number of people offered prayers.

Security remains on high alert in different parts of the country, including the federal capital, to avoid any untoward incident on the auspicious occasion. Snap checking and patrolling by law enforcing agencies have been increased.

Eid-ul-Fitr, the religious festival of Muslims, is celebrated on the first of Shawwal according to the Muslim Hijri calendar, marking the end of the holy fasting month of Ramazan.