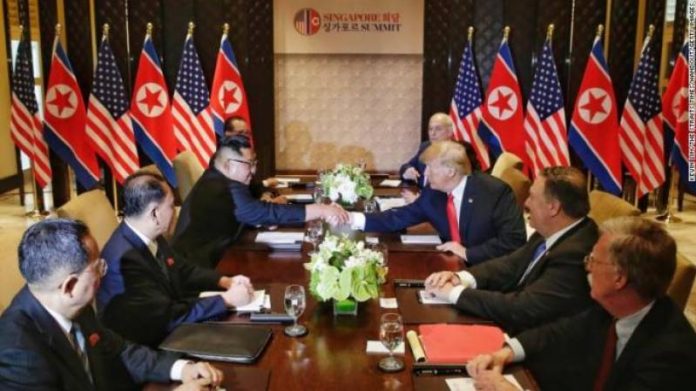 SINGAPORE, JUN 12 (DNA) – Nearly five hours of unprecedented and surreal talks between US President Donald Trump and North Korea’s Kim Jong Un culminated on Tuesday with fulsome declarations of a new friendship but just vague pledges of nuclear disarmament.For Trump, that amounted to a triumphant outcome in his extraordinary gamble with the rogue kingdom’s despotic leader.

But there were scant details on what new commitments had been secured from Kim, even as Trump announced he would end the regular military exercises the US conducts with South Korea.

Whether nuclear disarmament is indeed the final outcome of Tuesday’s summit won’t be known for years, if not decades. But the dramatic act of extending his hand to one of America’s longtime adversaries will forever illustrate Trump’s gut-driven, norm-shattering tenure.

“We both want to do something. We both are going to do something. And we have developed a very special bond,” Trump said at the conclusion of the landmark summit. “People are going to be very impressed. People are going to be very happy.” The document he and Kim signed said the North Korean leader “reaffirmed his firm and unwavering commitment to complete denuclearization of the Korean Peninsula.” In exchange, Trump agreed to “provide security guarantees” to North Korea .

But there was no mentioning the previous US aim of “complete, verifiable and irreversible denuclearization.” And Kim’s commitments did not appear to go beyond what he already pledged to do in April when he met South Korean President Moon Jae-in along their countries’ border.

Trump insisted during a news conference the agreement went further than many people expected. But he acknowledged the effort to rid North Korea of its nuclear arsenal was in its early stages.

We will do it as fast as it can mechanically and physically be done,” he said. More critical, in Trump’s telling, was the development of a personal bond with Kim, a brutal dictator responsible for the deaths not only of his own citizens but of at least one American, Otto Warmbier, who was returned to the US in a coma only to die days later. “I think our whole relationship with North Korea and the Korean Peninsula is going to be a very much different situation than it has in the past,” Trump said during the summit. Later, during his news conference, Trump said Warmbier’s death contributed to the summit taking place.

“Without Otto, this would not have happened,” Trump said. Trump and Kim — both intent on making history — greeted each other early in the day with extended hands in front of a row of US and North Korean flags, a previously unthinkable sight that reflects a new chapter in the two countries’ acrimonious relationship.

Trump’s threats to politely walk out of the meeting if his expectations were unmet did not materialize. Instead he predicted he could “solve a big problem, a big dilemma” alongside his new partner. “Working together, we’ll get it taken care of,” Trump said.

The remarks came amid an improbable series of events that few could have anticipated even three months ago. The unlikely images of US and North Korean counterparts engaging in friendly dialogue lent the day an air of unreality. In a detailed menu, the White House said the men were served Häagen-Dazs vanilla ice cream for dessert.