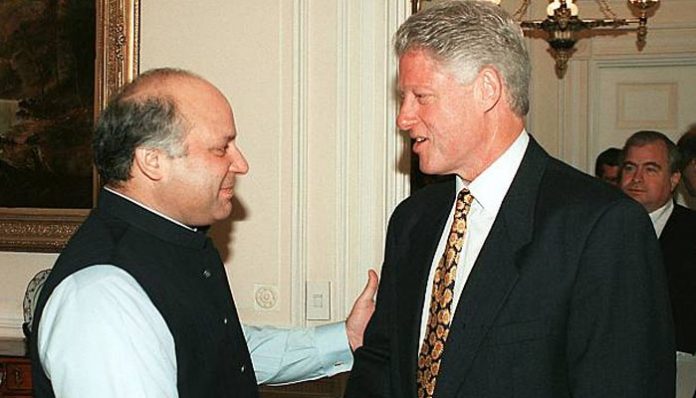 NEW DELHI, JUN 12 (DNA) – The then US president Bill Clinton had warned former prime minister Nawaz Sharif of the dangers of a war with India amid the Kargil crisis, claims Srinath Raghavan in his book ‘The Most Dangerous Place’.The book details the history of US involvement in South Asia, discussing its engagement with India, Pakistan and Afghanistan. It looks at how the US has been a crucial player in regional affairs even as South Asia experienced tumultuous changes, says foreign media.

According to the author, “On 3 July [1998], as Sharif flew to Washington, American intelligence found evidence that the Pakistanis were preparing the nuclear arsenal for possible deployment. Clinton’s officials, Talbot recalled, had ‘a sense of vast and unprecedented peril’.

Memories of the Cuban Missile Crisis came flooding back. Ahead of the meeting with Sharif, National Security Advisor Sandy Berger told the President that the objective was not only to induce a Pakistani withdrawal but also to help Sharif stay on in power.

The fact that the prime minister was coming to Washington with his family suggested that he was unsure of his position at home. Talbot added that Clinton must also bear in mind Indian sensitivities. The United States seemed poised to clear decades of mistrust in India about American attitude towards Pakistan.”

“In their meeting on 4 July, Clinton emphasized that a Pakistani withdrawal could not be linked to an American diplomatic intervention in Kashmir. Sharif insisted that Pakistan would withdraw its forces provided India committed to settling Kashmir within a specific time frame.

‘If I were the Indian prime minister,’ Clinton shot back, ‘I’d never do that.’ In any case, he was unwilling to go down this route. The President warned Sharif of the dangers of sleepwalking into a major war: ‘I genuinely believe you could get into a nuclear war by accident.’

In their one-on-one session, Clinton brought up the Pakistani moves to prepare nuclear-armed missiles for deployment and warned that it could lead to catastrophe. Eventually, Clinton persuaded Sharif to issue a statement on restoring the status quo on the LoC.

At Sharif’s insistence, Clinton agreed to add a line that once the sanctity of the LoC had been restored, he would take a personal interest in encouraging a speedy resumption of the dialogue agreed to in Lahore,” reads the book.

“By 26 July, the last of the Pakistani intruders had pulled back behind the LoC. Although Clinton was sincere in his assurance to Sharif, he was unable to deliver on his commitment. In October 1999, following a gauche attempt at forestalling a coup, Sharif was deposed by General Musharraf. US-Pakistan relations sank to a new low. So frayed were their ties that the following year Palestinian leader Yasser Arafat offered to Musharraf to intercede on his behalf with Clinton,” the writer adds.