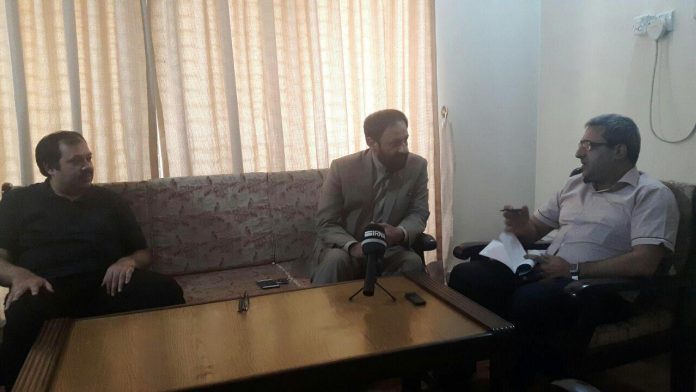 TEHRAN, JUN 12 (DNA) – Syed Ali Reza Razavi said trade ties between Iran and Pakistan are on the rise but lack of information about each country’s capacity in trade sector is a major hindrance to further boosting the bilateral trade.He said business communities of both countries are unaware of each other’s capabilities and opportunities available in trade sector.Member of Lahore Chamber of Commerce and Industry (LCCI) expressing his views said that business communities of the two countries should enter into joint ventures and sign MoUs which would pave the way for Free Trade Agreement (FTA).

He said that the US and its European allies through a conspiracy have created a wedge among the Muslim countries. “We should know that America always plays a very long term game, they make their policies like the moves of chess game with an objective to check mate their opponent, he said.

“Iran fought a successful war against Iraq, which actually was not a war between Iran and Iraq rather it was between Iran and rest of the world including the Arab states, we saw that Iran had survived that war, and after so many unjustified sanctions and barriers Iran is still surviving and this is not acceptable to the US,” noted the business activist.

He added that US with the support of Arab countries has formed a military alliance to make the Muslims engaged with each other. “The US is afraid of Iran’s progress and Trump wants to protect Zionist Regime at any cost,” Syed Ali Reza Razavi said.

He went on to say that there are some circles in Pakistan who are against trade with Iran and they are continuously warning other traders of serious consequences on doing business with Iran, which is very unfortunate rather it is a disinformation.

“Nothing will happen if we do business with Iran, there are many countries in the world that have strong trade ties with Iran,” he added.

He said in recent years over 100 business delegations visited Pakistan, which shows that we are ready to enhance trade ties with Iran. “There is a huge potential of cooperation available between Iran and Pakistan trade sector which is yet to be explored,” said the trader.

He said that lack of banking channel is a major hurdle in boosting Iran, Pakistan trade. He said that resumption of banking ties between the two countries would also help in stopping the Illegal trade which is not good for both Iran and Pakistan.

He said that Iran and Pakistan can enhance their trade ties and remove all hindrances through close interaction between the business communities of the two countries. He appreciated the role of Iran embassy in facilitating the traders of Pakistan. “We have lot of scope in business with Iran,” he said.

The businessman noted the increase of direct flights between Iran and Pakistan would prove to be a major step in boosting bilateral trade ties.

He said that traders of Iran are keen to have business with Pakistani counterparts, which is very encouraging. We can overcome all challenges through close cooperation.

He said that unfortunately there are international pressures on Pakistan regarding trade with Iran and that is why the Iran-Pakistan (IP) gas pipeline project is lingering on for many years.

He added that lack of information about the capabilities of Iran and Pakistan in the business communities of the two neighboring countries is also hindering the promotion of bilateral trade.

“We should hold solo exhibitions of each other products,” he suggested.

Syed Ali Reza Razavi said that training session of the teachers of the two countries should also be conducted so that Iran and Pakistan can come closer to each other. “In November this year there would an international conference in Government College University of Lahore and I wish that some experts from Iran would also attend the event.

He said that Pakistani city of Sialkot is famous all around the world for making sports goods and surgical items and they can be exported to Iran.