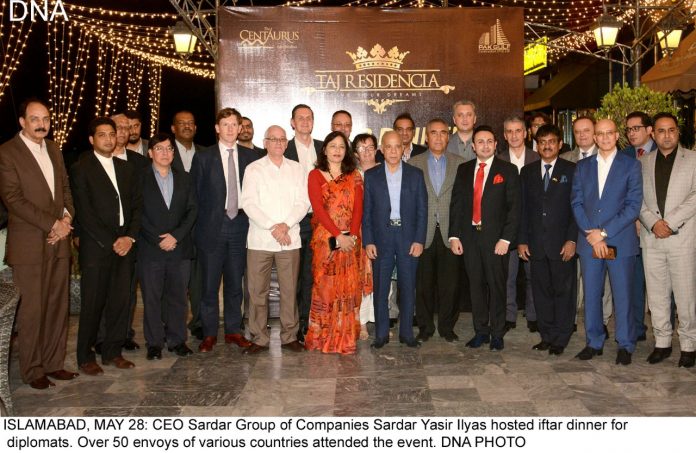 ISLAMABAD, MAY 28 (DNA) – Over  50 ambassadors from various countries turned up to a grand reception and Iftar dinner hosted by CEO Sardar Group of Companies Sardar Yasir Ilyas.Sardar Yasir in his brief remarks welcomed the distinguished diplomats at the Centaurus and wished them happy Ramazan.He said diplomats were playing key role in strengthening of relations between Pakistan and their respective countries.

He said Sardar Group of Companies had taken a number of initiatives and the Centaurus Mall was one of them.

He noted with satisfaction that  apart from locals, foreigners too had taken keen interest in various accommodation facilities offered at The Centaurus and found them modern and state of the art.

Col Misbar ur Rehman ® the Executive Director was also present on the occasion along with his team to make the even a complete success.

Holding of diplomatic get-togethers is hallmark of Sardar Group of Companies with a view to promoting cultural and social activities. Recently a photo exhibition was held at The Centaurus which was inaugurated by the Ambassador of UAE.

Likewise, a couple of months ago unveiling of ghalaf of Kaaba took place at The Centaurus- an event attended by thousands of people from across the country.=DNA