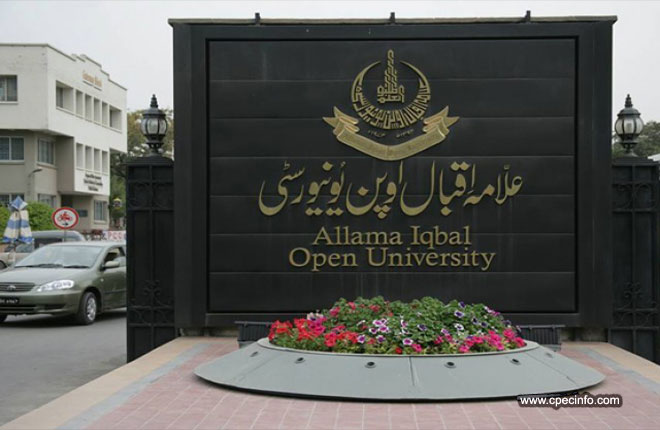 ISLAMABAD, MAY 27 (DNA): Allama Iqbal Open University (AIOU) is working on a comprehensive plan to provide educational support to China-Pakistan Economic Corridor (CPEC), this was stated on Sunday.“The plan is line with the government’s efforts developing educational corridor, as a part of CPEC,” said Vice Chancellor, Shahid Siddiqui, while reviewing the on-going projects for setting up Chinese Language Centers in Pakistan in collaboration with the Chinese Universities.

A considerable progress has been made to set up language and Culture Center at Gwadar in collaboration with Beijing Institute of Graphic Communication. The facility will also be available to the local community.

This Center is expected to start working by the end of this year. It will meet the language requirements of the Pakistani workers engaged in the ongoing projects at Gwadar Sea Port.

The University has also planned to establish Chinese Language Centers along the route of CPEC, where its regional offices are situated.

Initially these centers will be set up in Islamabad, Lahore, Multan and later on in Rahim Yar Khan, Faisalabad, Peshawar, Gilgit, and D G Khan.

The Vice Chancellor wishes that the AIOU should have a leading role in providing educational support to CPEC, said Dr. Zahid Majeed, incharge of the AIOU’s international Collaboration department.

During the last three and half years various initiatives were taken to achieve the purposes, he added.

A Letter of intent has already been signed to establish China’s Confucius Center at Gwadar and the AIOU’s Main Campus.

The Gwadar Center will be a major step forward to this direction to teach and popularize Chinese language in Pakistan.

The project has been found viable, since the local community as well as the Pakistani manpower, engaged In CPEC have shown keen interest in the establishment of Language Center.

The University is also working on two very important projects in line with Government’s vision 2025 i.e. one project with Yunnan Normal University on renewable energy and second will be with Tsinghua University, Beijing to conduct a project of water treatment (Arsenic removal).

This project will be an opportunity for sharing China arsenic removal experience in Pakistan. So lets joins hands in contributing to build safer and healthy communities in Pakistan.

As per the agreement of the two sides, Urdu learning Centre will also be set up in Beijing. The two sides will also start joint academic programs particularly in the field of printing technology and teachers’ training.=DNA