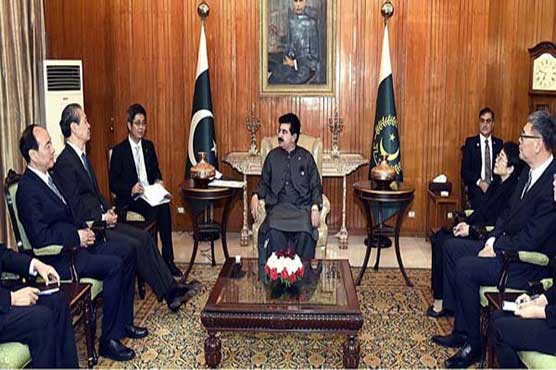 ISLAMABAD, MAY 23 (DNA) : Acting President Muhammad Sadiq Sanjrani Tuesday underscored the need for a joint strategy to counter the narrative against CPEC and China-Pakistan relations as some regional and global players continued to create hurdles in the way of smooth implementation of the CPEC projects by hatching conspiracies.

The Acting President expressed these views while talking to a delegation of Chinese parliamentarians currently visiting Pakistan under the leadership of Kong Quan, Vice Chairman of Foreign Relations Committee of the Chinese People’s Political Consultative Conference (CPPCC) here at the President House.

He said Pakistan wanted peace in the region and would continue to support all the efforts aimed at peace and stability at regional and global levels.He said that the Belt and Road Initiative and vision of shared prosperity would make Asia an epicenter of socio-economic power.

He said the Pak-China friendship stood against all the odds and in the ups and downs. “This uniqueness makes it a cornerstone of our foreign policy and we, as a nation, take pride in our friendship with China,” he added.

The Acting President while emphasizing the need for further boosting cooperation, said the historic relationship had entered into a strategic cooperative partnership, which would prove to be an anchor for regional peace and stability.

He expressed his satisfaction that the China Pakistan Economic Corridor was progressing smoothly and the project enjoyed across the board consensus on political fronts in Pakistan. He said that Pakistan was faced with problems of unemployment, electricity shortfall and economic crunch due to low industrial growth and CPEC would emerge as a ray of hope for both Pakistan and China.

He also appreciated that the CPEC’s energy and infrastructure projects were being completed and implemented within the stipulated time. He hoped that work on Gwadar projects, including New Gwadar International Airport and social welfare projects with active Chinese assistance would be accelerated.

The Acting President emphasized that Special Economic Zones needed special attention of the Chinese leadership as they played a crucial role in taking the CPEC to the next level. He called for a robust participation by Chinese State Owned Enterprises and private sector in SEZs.

He also lauded the Chinese leadership’s commitment to all the initiatives aimed at regional prosperity and peace. He conveyed his warmest felicitations to President Xi Jinping on his re-election as president and elevation as “core leader” of CPC.

Acting President Sanjrani observed that there was a need to increase exports from Pakistan to China. He also called for maximum participation of Pakistani business community leaders and trade delegates in the international trade exhibition being held in China in November this year.

The head of visiting delegation agreeing with the Acting President, assured to take steps for further improving the trade between the two sides.

The Acting President also stressed the need for enhanced bilateral linkages and people-to-people contacts and interaction between the political parties, educational institutions, academia, media and young generation. “It is heartening to see strong government to government contacts between Pakistan and China. However, there is a need to enhance and strengthen institutional linkages between the parliaments of two brotherly countries,” Sadiq Sanjrani said.

He expressed his well wishes to the government and people of China and said that both sides would continue to strive for further consolidating the brotherly ties. “I am looking forward to my visit to China in July 2018 and hope that my upcoming visit to China will further strengthen the existing bilateral parliamentary relations.”