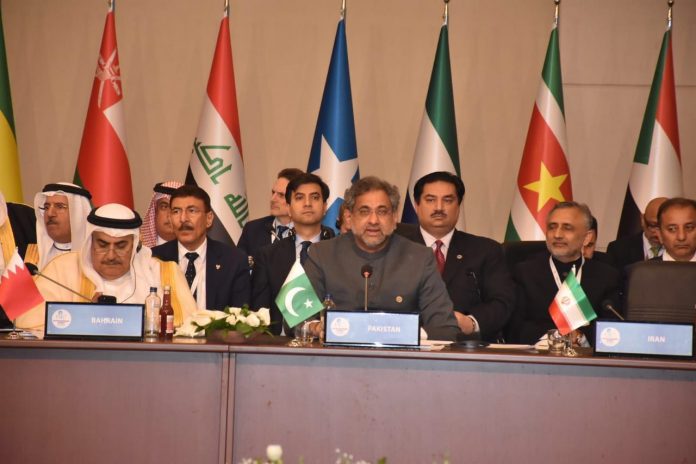 ISLAMABAD, MAY 19 (DNA) – On behalf of the people and Government of Pakistan, I convey our deep appreciation to President Erdogan for convening this timely and important Summit.Our gathering is important both for its key messages and a response strategy in the face of injustice, illegality and impunity against our Palestinian brothers and sisters.Pakistan joins the OIC countries in conveying our strong condemnation of the massacre and maiming of innocent Palestinians by Israeli forces earlier this week.

Today we in Pakistan commemorated a day of solidarity with the Palestinian people and special prayers were held in our mosques.

These killings represent yet another brazen chapter in the seventy years of injustice to the people of Palestine.

This year also marks the 70th anniversary of deliberate Israeli defiance of international law and norms.

It is deeply regrettable that the US did not heed to universal calls for rescinding its decisions about recognizing Jerusalem as the so-called capital of Israel, and relocation of its Embassy to the Holy City.

Pakistan stands in full solidarity with the Palestinian people in the face of unbridled tyranny.

It is therefore in the fitness of things that our conference resolutely condemns and rejects unilateral decisions and recurrent violations of international legality. Concurrently, it is heartening to note the strong message of solidarity and support by the OIC for their Palestinian brothers and sisters in these turbulent times.

We also see this Summit as an occasion for introspection and charting a path for justice and equity for the people of Palestine. We must unify our ranks and evolve an effective response strategy.

We are at an important juncture in history. It is no longer a question of choice but of necessity – to rise above our differences, demonstrate solidarity and support for the people of Palestine and above all ensure that international law is upheld without exception.

I would like to recall two questions that I had placed before our previous extraordinary summit here last December.

Firstly, how have we come to this pass? The fact is that we have not given concrete shape to our expressions of solidarity and unity. This has been true not only for Palestine but for other common causes also.

The world is witness to a similar pattern of tragedy, both in scope and scale. For seven decades, the people of Jammu and Kashmir have been subjected to illegal Indian occupation and blatant violation of their fundamental rights including their right to self-determination.

As in the case of Palestine, the UN Security Council resolutions continue to be defied and the just struggle for freedom conveniently branded as terrorism.

Without rectifying our political, economic, communication and technological weaknesses we will not be able to mount a sustained defense of our brethren whether in Palestine or Kashmir.

The second key question is what should be our response? Should we accept defiance of international law and the reign of state terrorism as fait accompli? It is clear that only a demonstration of rage will not be sufficient to alter the status quo.

Our response should therefore be multi-pronged and well-considered.

On the one hand, it is essential to reaffirm and renew our full solidarity and unity among and between our countries and people. We must also set aside our political differences. Even more important is to faithfully implement the OIC plans of action that are already in place in diverse areas.

Only by taking these actions can we resist external pressures, reverse the losses and take our destinies in our own hands.

Our response strategy must also include all possible options.

On the diplomatic front, we must continue to demand that the UN Security Council fulfill its key responsibility for implementation of its existing resolutions.

The OIC must demand accountability for defiance of its decisions. We must underscore that the Council’s credibility will be questioned if it does not deliver on its duty to ensure implementation of its resolutions. We must reject double standards in the enforcement of Council resolutions.

And if the UN Security Council is unable or unwilling to act, we should mobilize support in the UN General Assembly for rejection of revisionist decisions and ensuring accountability of violators of international law.

We must also follow up on OIC decisions for economic and other appropriate actions to change the behavior of the occupying forces.

We should also consider the possibility of seeking the ICJ’s advisory opinion on the illegality of recent actions.

We need to reach out to other states and groupings to sustain support for the just cause of the Palestinians, put an end to continued killings and state terrorism and build an independent and contiguous State of Palestine, on the basis of internationally agreed parameters, the pre-1967 borders, and with Al-Quds Al-Sharif as its capital.=DNA