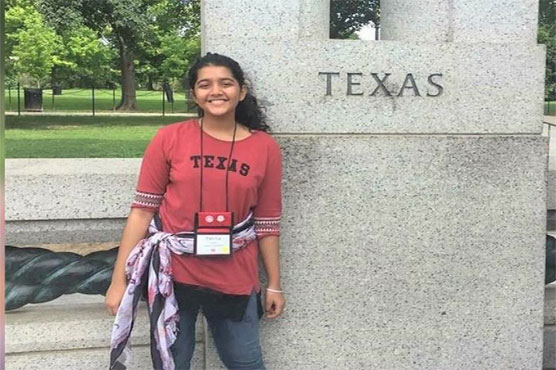 TEXAS, MAY 19 (DNA) – Sabika Sheikh, a Pakistani exchange student, is one of the student victims in Friday’s shooting at Santa Fe High School in Texas.Sabika was an exchange student with YES, which is funded by the US State Department. It provides scholarships for secondary school students from countries with significant Muslim populations to spend one academic year in the US.

The Pakistan embassy in Washington confirmed Sheikh’s death in a series of tweets.

“Our thoughts and prayers are with Sabika’s family and friends,” Pakistani ambassador to the United States Aizaz Ahmad Chaudhry said.

Ten people, mostly students, were killed when a teenage classmate armed with a shotgun and a revolver opened fire in a Texas high school Friday, the latest deadly school shooting to hit the United States.

The gunman, arrested on murder charges, was identified as Dimitrios Pagourtzis, a 17-year-old junior at Santa Fe High School. He is being held on capital murder charges, meaning he could face the death penalty.

Governor Greg Abbott said 10 people died and another 10 were wounded in “one of the most heinous attacks that we’ve ever seen in the history of Texas schools.”

“Nothing can prepare a parent for the loss of a child,” Abbott told reporters in Santa Fe, located about 30 miles (50 kilometers) southeast of Houston.

Abbott said the gunman apparently carried out the attack with a shotgun and a .38 revolver that were legally owned by his father.

The Houston Chronicle said Pagourtzis also threw pipe bombs into a classroom at the start of the school day.