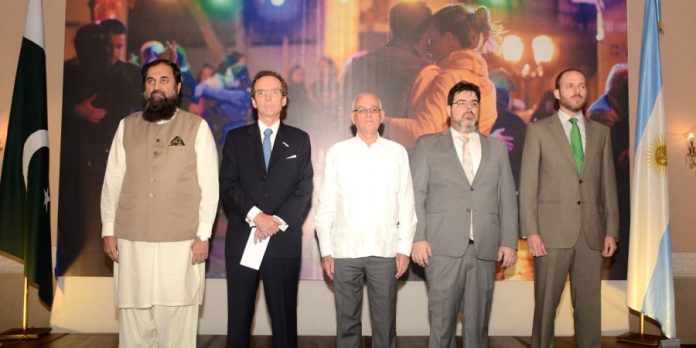 ISLAMABAD, MAY 10 (DNA) – Ambassador of Argentine, Ivan Ivanissevish has said that Pakistan and Argentina enjoy deep rooted and cordial relations since the October, 1951.He was speaking during a reception he hosted to celebrate the 208th anniversary of first national government on May 25th 1810.

He added, Argentina at the time had a very small population, made up by Native Americans, Europeans –overwhelmingly of Spanish origins-, Africans and a very large mixture of all of them.

From 1820 onwards, but massively between 1880 and 1914, an influx of immigrants of the most diverse countries found their home in my country.

There were people from most European countries, while others came from neighbouring countries in South America, the Middle East and North Africa and even from Japan and China.

In 1910 three out of every five people in Buenos Aires were foreigners, and half of the population of the Province of Buenos Aires – which is the size of Spain – were also foreigners.

In order to absorb this heavy influx, Argentina had to develop instruments to make sure that people learned our language and could absorb our culture and positively contribute to it.

The Argentine Ambassador mentioned that the compulsory education became a constitutional right after the 1853 Constitution, and free non-religious state run education was established to that effect.

Private schools could cater for the needs of those who could afford them as long as they satisfied the Argentine primary and later on the secondary curriculum.

Furthermore, freedom of religion was made compulsory from then onwards.  Under democratic Governments, attacks on grounds of religion or race were condemned, and even today’s Argentine society –mostly superficially religious or agnostic- does not tolerate jokes on or insults against religious figures.

On the other hand, religious sects or groups that encourage hate speech and violence or isolation from the rest of society have no place in Argentina.

The challenge of absorbing those immigrants was a complex one.  It took many decades and generations to assimilate the newcomers, but the end result was worth it.  Today my country can show a wealth of creativity and diversity that could hardly be imagined without the contributions of all those foreign influences.

In this regard, I would like to underline that tangos and milongas , our quintessential urban music and dances, are perhaps the best examples of it.  Their roots stretch back to Spain, Scotland, Sub-Saharan Africa, Germany and Italy.  Hence we decided to choose them as a major theme of our audio-visual presentations today.

Moving on to a wider diplomatic dimension, such diversity has also led Argentina to engage from early on with countries of different cultures and historical backgrounds.  Hence our interest in developing from early on our links with Pakistan.

Since then bilateral relations have been growing steadily, and I am sure that there is potential for even further growth, he added.

The latest example of this is the establishment of an Argentine-Pakistan joint venture, ARPACO, to commercialize Argentine grain and silage bags and machinery.

This will be a major contribution to the agri-food sector in Pakistan, and it will help overcome the grain storage deficit and improve silage and livestock fodder management in this country.

So, may we take the opportunity of our National Day celebration to reaffirm diversity as a necessary element that promotes growth and change in our countries and the world as a whole.

We are being invited to do that by the already served empanadas –Arab cuisine we inherited via Spain- and the tangos and milongas that are being shown on the screens. He added.=DNA