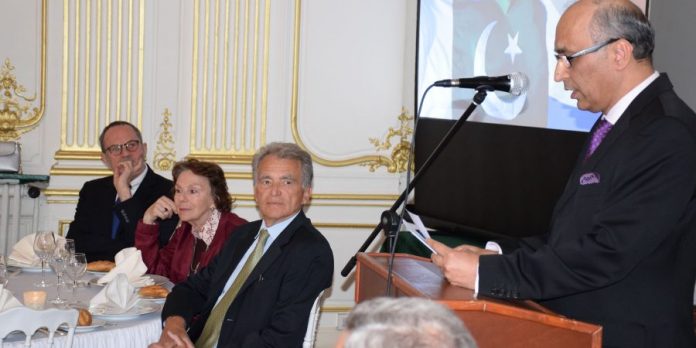 PARIS, MAY 04 (DNA) – The first ever advocacy group, the “Association of Friends of Pakistan” was launched during a simple yet impressive ceremony held in the Embassy of Pakistan in Paris yesterday.The ceremony was attended by a large number of people including former French Ambassadors to Pakistan, representatives of French companies doing business in Pakistan, scholars, researchers, journalists and officials from the French Ministry of Foreign Affairs and Parliament.

Speaking on the occasion, the Ambassador of Pakistan to France, Mr. Moin ul Haque termed the launching of this Friendship Association as a milestone in Pakistan-France relations. He stated that the Association will bring together people from all walks of life and would serve as an effective forum to strengthen the existing friendly relations and to facilitate in further developing economic, cultural and educational linkages between Pakistan and France.

The Association of Friends of Pakistan will be registered under the French laws and will have a Bureau to manage its affairs. It will organize various events to promote relations between the two countries.

A presentation tracing 70 years of Pakistan-France relations was also shown at the occasion.

Later guests were also entertained with a dinner offering popular dishes from both Pakistan and France.