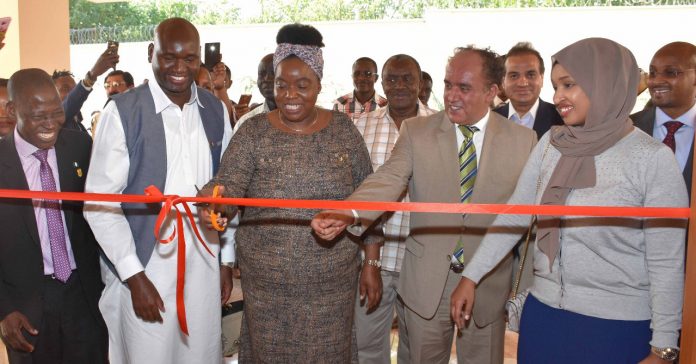 ISLAMABAD, (DNA) – Foreign Minister of Kenya Monica Juma formally inaugurated the new premises of the Kenyan High Commission and the Residence of the High Commissioner.The Kenyan foreign minister during her visit also met with the Prime Minister Shahid Khaqan Abbasi and other dignitaries.

This was her first visit to Pakistan after taking charge as Minister for Foreign Affairs in January this year, while she has already visited Pakistan on two occasions. Ambassador of Kenya to Pakistan Prof. Julius Bitok hosted a reception at his residence for the visiting Foreign Minister.

The Kenyan Foreign Minister Monica Juma while speaking on the occasion termed her country’s relations with Pakistan very important and hoped these relations will grow further in the coming days.

She said construction of Kenyan embassy and Kenyan House in the Diplomatic Enclave was testimony to the fact that Kenya attached great importance to relations with Pakistan.

She thanked the Pakistani officials for facilitating the local Kenyan diplomats for making the construction project a success adding relations between the two countries will now get further boost.

She continues to serve on many boards, including on the International Advisory Board for the United Nations University for Peace headquartered in Costa Rica, the Training for Peace Programme, and the African Governance Institute.

Union, Inter-Government Authority on Development (IGAD) and United Nations Economic Commission for Africa (UNECA), based out of Addis Ababa.