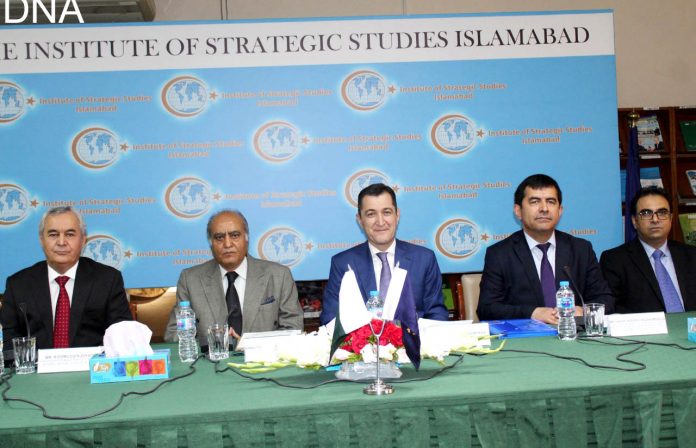 ISLAMABAD, APR 26 (DNA) -Achievement of sustainable development would only be possible by building effective cooperation through mutual trust and involvement of all stake holders. This will translate into a genuine partnership.” This was stated by Dr. Nizomuddin Zohidi, First Deputy Minister of Foreign Affairs, Republic of Tajikistan during his address at a Seminar on “The International Decade for Action: Water for Sustainable Development 2018-2028” organized by the Institute of Strategic Studies Islamabad (ISSI) today.

He also stressed on factors which need to be taken into account regarding water scarcity.

These include; climate change, population growth and increase in demand for water resources, means of implementation particularly human and financial resources, cooperation in the field of education and culture and Trans-boundary component of water cooperation which is central to ensuring peace and stability.

Jononov highlighted that Tajikistan is one of the leaders in advancing water resources at an international level and aims at using its water resources to not only meet national needs, but also to create regional balance.

Water, he said, is a key element not only for social development, but also for ensuring peace, stability and development.

Taghaimurod spoke on how water is a strategic resource of Tajikistan and is the basis of social and economic development and even national security, which is why the country is trying to find a good position on the international scene in addressing one of the key issues of global warming.

He went on to highlight targets for the new international decade which include implementation and promotion of relevant programs, projects and expanding cooperation and partnership at all stages, as well as strengthening of communication activities at various levels.

Dr. Ashraf in his presentation said that water, food and energy are three important components for development.

On the topic of water scarcity, he said that Pakistan is only storing 10 per cent of its waters and with the increase in population and as a result on agricultural activities there is huge pressure on the ground water.

Hence, Pakistanneeds to change its priorities and coupled with political will, water crisis can be avoided altogether

. Suhail said that if water is the present then its conservation is the future. Hence, the government should announce ancillary policies to its existing ones.

With reference to the political and legal components, he said that existing legislature needs to be implemented and all stake holders needs to be engaged for a more transparent decision making process.

Furthermore, being a lower riparian nation, Pakistan needs to focus on out-of-box water storage policies to be implemented at all levels.

Earlier, in his welcome remarks, Chairman ISSI, Ambassador Khalid Mahmood lauded the President of the Republic of Tajikistan, H.E Mr. Emomali Rahmon who has been the moving spirit behind various international initiatives on water security.

The Ambassador said that according to a UN report one-sixth of the world population does not have access to safe drinking water, and that by 2025, half of the countries worldwide will face water stress or outright shortages.

He said that being a lower riparian country to India, Pakistan is dependent upon the upstream ecosystems to provide the water supply for irrigation, drinking and generating hydropower.

This is why it is important that the Indus Water Treaty is followed in letter and spirit and its Dispute Resolution mechanism does not become dysfunctional.

In his concluding remarks he said that existing water threat is a dire threat to all human activity which is why it is imperative that this issue be addressed as soon as possible.

The best way is to raise awareness and find ways and means to find better ways to conserve water as soon as possible.

Hence, we should all make every effort to mitigate the impact of water scarcity, and in fact, to reverse this trend with participation at all levels.=DNA