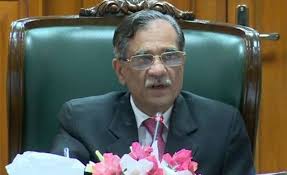 ISLAMABAD, APR 25 (DNA) – Chief Justice of Pakistan Mian Saqib Nisar on Wednesday left for Balakot on an unannounced tour to review uplift work for the survivors of the 2005 earthquake. The chief justice took the decision while hearing a sou motu case pertaining to alleged embezzlement of funds entitled for victims by the Earthquake Reconstruction and Rehabilitation Authority (ERRA).

He observed that spending funds of earthquake victims on other projects is a crime.

The top judge went to the earthquake-hit city by road after a helicopter could not be arranged immediately.

The chief justice said that the court will hear the problems of locals. He also ordered all authorities concerned to reach the area.

The apex court had taken notice on an application of Shahzad Mehmood Qureshi of Mansehra inviting the attention of the court towards the plight of earthquake victims, who are living in the makeshift houses without water facility and improper education arrangements for their children despite the lapse of 13 years.

He also accused Khyber Pakhtunkhwa government of not providing encumbrance free 12,000 kanals of land to the ERRA for initiating development schemes. He added that the authority had not developed any school, college, hospital and other welfare departments in the area.

According to a report of a sessions judge appointed by the apex court to visit the area, nothing was done in areas hit by earthquake in 2005.

The chief justice on Tuesday expressed dissatisfaction over the reconstruction and rehabilitation efforts of ERRA and summoned the Auditor General of Pakistan and finance secretary to apprise the court of the utilisation of around $6 billion financial assistance sent by the international community for the victims.

Brigadier Zafar (retd), an official of ERRA, at last hearing informed the court that the authority was only executing department that worked on the scehmes announced by the government, adding that funds extended by donors are received by the government.