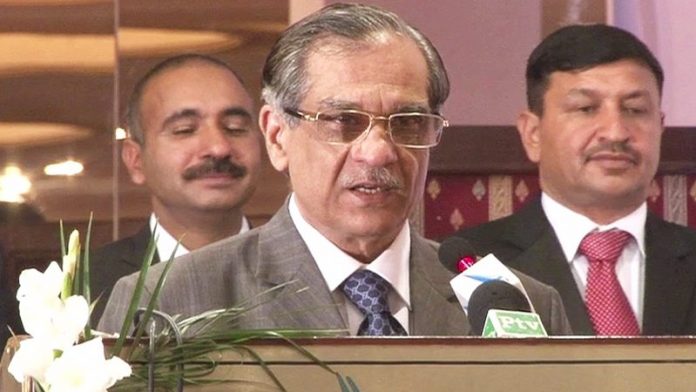 QUETTA, APR 11 (DNA) – Chief Justice of Pakistan Mian Saqib Nisar remarked on Tuesday that the judges announced judgments on the basis of the law and constitution, not out of free will.Addressing a gathering of judicial community in Quetta, the chief justice emphasised the veracity of decisions made by lower courts. “If the verdicts given by lower courts are solid, the decision will be upheld at superior courts,” he said.

Reminiscing on judicial history, Justice Nisar remarked that in the past there were judges whose verdicts were not changed even when challenged in the Supreme Court. “I wonder where such competent judges have gone who authored valuable judgments.”

Observing that the judges were responsible for any legal weakness in a verdict, he stressed complete understanding of law and the Constitution for adjudicating a case. “It is time to put our house in order,” noted Justice Nisar. “A society without justice cannot survive.”

The CJP observed that while laws dating back to the 1800s, could not be amended, justice could be provided by applying the same laws crafted by the British rulers.

“We do not have the power to change the laws penned down by the British. We have to work under these laws,” he told the audience. “Lawyers are the foundations of judiciary.”

It is an honour to be a judge, he said while urging the community to maintain that respect. He added that the judges were tasked to provide justice. “How will we face God if we do not strengthen the foundation of justice?” he asked.

Dwelling on litigation, Justice Nisar remarked that people spent years running behind trial courts. “A person who does not find justice for 40 years dies every single day. Why do we prolong cases so much?” he asked.

The chief justice lamented that the institution lacks resources and the government’s co-operation was not of the required level.