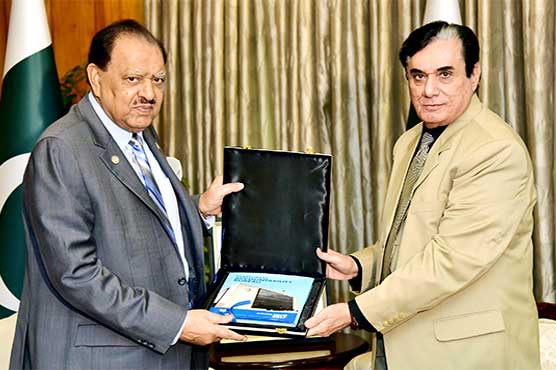 ISLAMABAD, APR 10 (DNA): President Mamnoon Hussain Tuesdays said that indiscriminate action was the basis for eradication of corruption, so that confidence of the masses in the national institutions could be restored. He stressed that the National Accountability Bureau (NAB) officers should be very honest and unbiased because corruption free administration and decisions were the hallmarks of NAB.

The president was talking to chairman NAB justice (retd) Javed Iqbal who called on him at the Aiwan-e-Sadr, said a press release.

The chairman NAB also presented Annual Report – 2017 of his organization to the president.

While appreciating the annual report, the president emphasized that corruption could be only eliminated from the society if all the requirements of justice were fulfilled.

He directed that reservations of the courts and public against NAB should be removed.

The president also underlined that the ongoing development process should not be affected by the steps taken by the accountability institutions and officers.

He underscored that extermination of corruption and firm accountability were considered as national agenda therefore, all efforts should be made to enhance the confidence of public in such institutions.

He observed that Pakistan made significant improvement in the international ranking with reference to the indicators of corruption in which NAB had played an important role.

On the occasion, chairman NAB Justice (retd) Javed Iqbal assured the president that NAB would continue to take indiscriminate action against corruption.