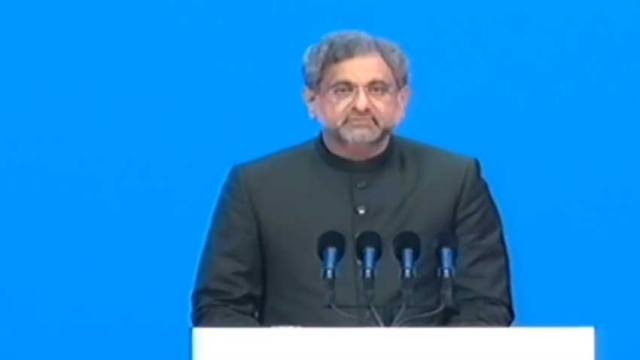 BOAO, APR 10 (DNA) – Prime Minister Shahid Khaqan Abbasi on Tuesday said port city Gwadar is going to become a hub of international trade under the China Pakistan Economic Corridor (CPEC) project as the development of the deep sea port is being done at fast track. Addressing opening ceremony of Boao forum in Hainan Province of China, the prime minister said that the Asian region was emerging as centre of new world economic order, adding that CPEC is a superb plan of mutual cooperation and unprecedented progress.

The conference runs from April 8 to 11 in Boao, a town in south China’s island province of Hainan. The main theme of the conference is “An Open and Innovative Asia for a World of greater Prosperity”.

China’s Belt and Road Initiative has gained recognition globally, adding that fourth economic revolution was knocking at the doors with artificial intelligence and biotechnology creating a new world.

“It was natural for Pakistan to take lead in partnering up with China to usher in new era of peace and prosperity through enhanced connectivity,” he remarked.

Hailing the development in China, PM Abbasi said that the country was playing a prominent role in international trade as it marked massive growth in past fourth decades.

He hoped that China will register more progress under the leadership of President Xi Jinping.

He said Pakistan will take lead in regional connectivity and BOAO forum has proved important to raise the stature of Asia.

Highways and motorways are the important part of the CPEC, Abbasi said, adding, “Pakistan and China are iron brothers”.

On Monday Abbasi and the Vice President of Power China Limited Li Yanming on Monday witnessed the signing of a Memorandum of Understandings (MoU) between Inter-State Gas Systems (ISGS) of Pakistan and Power China for laying of North-South Gas Pipeline.

The MoU was signed in a simple ceremony held in Sanya, a City on the southern end of China’s Hainan Island.