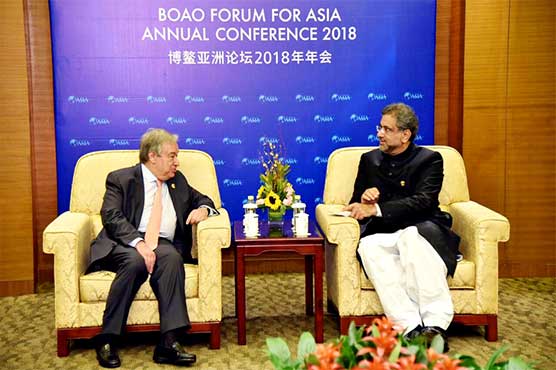 ISLAMABAD, APR 10 (DNA): Prime Minister Shahid Khaqan Abbasi Tuesday said the “deliberate and unprovoked” ceasefire violations by India along the Line of Control and the Working Boundary could escalate dangerously if not put to an end. He was talking to the United Nations Secretary General Antonio Guterres who called on the sidelines of BOAO Forum for Asia.

The Prime Minister said the violations by India were moving towards a dangerous escalation resulting in martyrdom of innocent civilians, a press release issued here from the PM Office said.

Abbasi conveyed grave concern over the use of pellet guns by Indian forces in IoK and said “Pakistan seeks a just and peaceful resolution of the dispute, reflecting the wishes of the people of Jammu and Kashmir, in accordance with UN Security Council Resolutions.”

The Prime Minister said that the UN must play its part in highlighting Indian atrocities being inflicted upon Kashmiris in the Indian Occupied Kashmir.

The Prime Minister said Pakistan followed Zero tolerance policy towards terrorism and extremism and has achieved significant success in this regard.

The Prime Minister also expressed grave concern at the plight of Rohingya Muslims.

The UN Secretary General acknowledged Pakistan’s efforts towards counter-terrorism, humanitarian assistance to the Afghan refugees and the UN peacekeeping operations.

He maintained that he had been advocating the need for a serious dialogue on the Kashmir issue.