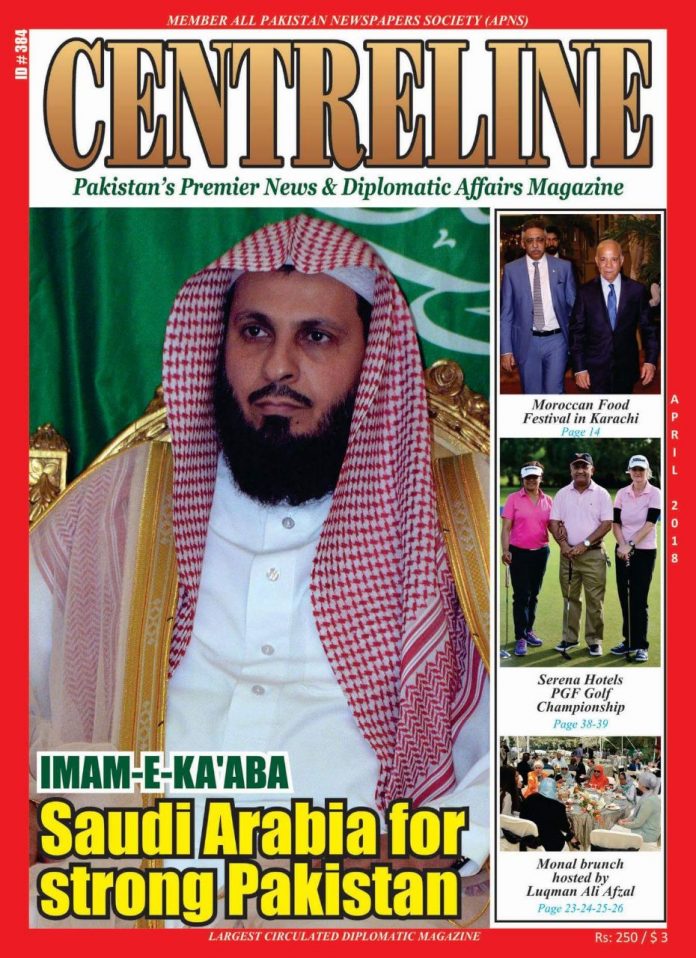 ISLAMABAD)- Ambassador of Saudi Arabia Nawaf Saeed Al-Malkiy hosted dinner in honour of visiting Imam-e-Kaaba Dr. Saleh bin Muhammad Al-Talib. The dinner among others was also attended by a large number of members of the civil society and diplomats. A select group of media people was also invited. Speaking on the occasion Imam-e-Kaaba, termed his Pakistan visit very successful adding during his visit he had chance to meet with people hailing from different walks of life.

He further said that Pakistan and Saudi Arabia enjoy excellent relations and hoped these relations will grow further even in the coming days.

Ambassador of Saudi Arabia also spoke on the occasion and said relations between Pakistan and Saudi Arabia are excellent. He said visit of Imam-e-Kaaba shall further strengthen these bonds of relations.

Imam-e-Kaaba Dr. Saleh bin Muhammad Al-Talib on the occasion presented a gift to Mumahhed Haleem who taught Quran to Dr. Saleh. Muhammad Haleem came all the way to meet with the Imam from Mansehra.

The Prime Minister said that Pakistan greatly values its ties with the Kingdom of Saudi Arabia, which draw its strength from religious affinities, historic bonds and mutual respect.

Imam-e-Ka’aba in his remarks thanked the Prime Minister and the government for the warm welcome and observed that the entire Muslim world considers Pakistan as its strength and takes pride in its accomplishments.

Discussing the regional situation and the challenges faced by the Muslim Ummah, Imam-e-Ka’aba appreciated the efforts of Pakistan for promoting peace in the region. He appreciated the efforts and the steps taken by the government towards overcoming the menace of terrorism. He expressed his best wishes for the government and the people of Pakistan.

Earlier, in Lahore Dr Saleh bin Muhammad Al-Talib met Chief Minister of Punjab (CM) Shehbaz Sharif and discussed challenges being faced by Muslim Ummah. Dr Saleh bin Muhammad Al-Talib lavished praise on the younger Sharif for development projects in the country. Punjab Auqaf and Religious Affairs Minister Zaeem Qadri and other religious scholars were also present in the meeting. During the meeting, strategy to cement Pak-Saudi ties was also discussed and CM Shehbaz exchanged his views with Imam-e-Kaaba in Arabic.