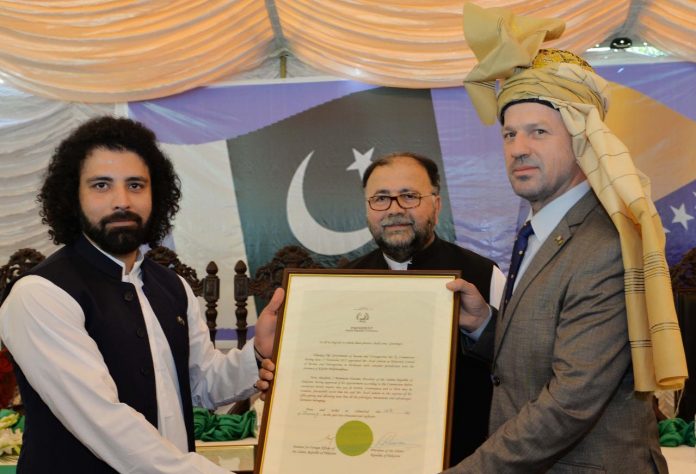 MARDAN (DNA) – A young industrialist, Asad Saleem, has been appointed Bosnia and Herzegovina counsel general for Khyber Pakhtunkhwa. A simple but prestigious event was organized in the context of referring Asad Saleem appointment for Bosnia and Herzegovina ambassadors Sakib Foric Participated. Speaking to the function, Ambassador of Bosnia Sakib Foric said that strong ties between Pakistan and Bosnia have been established, the consulate in Peshawar will be able to promote economic cooperation between the two countries.

He agreed to strengthen ties in the field of trade, agriculture, sports and textiles.

He said that in the independence of Bosnia, Pakistan played an important role in which our nation is well-versed .The Counsel General Asad Saleem will play a full role in supporting this relationship.

The Ambassador further said that the beginning of a new chapter of renewed diplomatic relations between the two countries will help the peoples of both countries.

Pakistan and Bosnia are looking at each other as complementary partners for regional balance, growth and partnership for well being of the respective people,

He also wished that the Honorary Consulate may prove helpful in promoting educational and business opportunities for the people of the both countries.