ISLAMABAD, MAR 22 (DNA) – The Spanish Giralda music concert held at ISLAMABAD SERENA  hotel left the audience spell-bound as the artists from Madrid, Spain presented a mesmerizing performance, thus winning the hearts of the music lovers present at the venue.

Ambassador Carlos Morales before the start of the show rightly remarked that the artists from Spain are going to put up a rare performance, perhaps first time in Pakistan, and the artists in their performance later on, lived up to the expectations of the ambassador and the audience. 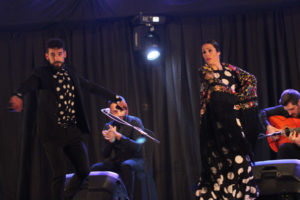 The word Giralda has multiple meanings. An icon of Seville, Spain, Giralda, the magnificent Bell Tower of a cathedral has weathered many storms since it stood on the ground in 1195,   built by a Muslim architect as the minaret of the Aljama mosque, before being turned into a Christian worship abode.

In Spanish language, the word Giralda also means “She who turns”. The event titled Giralda was a Flamenco dance performance.

Flamenco music, a magnum opus of Spanish culture is an art-form, closely associated with the Gypsies who settled in Andalusia, Spain and goes back over centuries. It is now taught all over the world.

The 70 minute performance for the local cultural cognoscenti’s was spellbinding. The two lead dancers, Ruben Puertas and Maria Vega trussed up in a corset, wearing  traditional multi-color  flamenco costumes and they drilled  their feet in rare percussive intricacy while throwing off extraordinary shapes with their angled out flung arms. 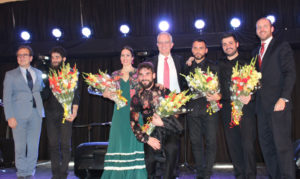 The drilling ferocity of their foot work with no music accompaniment at times forced the audience to given the duo a standing ovation.

There were sections that made the guests cheer the mesmerizing prowess of the two dancers Maria and Puertas’s techniques. Maria turned her tense wiry body into an entire rhythmic play ground.

While Jose Almarcha plucked his guitar strings like a man possessed, wing-footed Maria whirled and stamped in a similar possessed fashion, her heels pounding the stage like

Together with their band of a guitarist, percussionist, and a singer, Maria and Puertas danced their hearts out with their lean bodies, dazzling solo numbers with an air of gravitas.

To hold such musical events are part of Spanish embassy’s efforts to promote not only Spanish culture world-wide but to promote and strengthen cultural bonds with Pakistan.

Ambassador Morales, ever since his arrival in Pakistan as Spanish ambassador, has hosted such events on regular basis thus providing especially the Pakistani music lovers with an opportunity of enjoying the Spanish music and getting some first-hand information about various kinds of Spanish music.=DNA