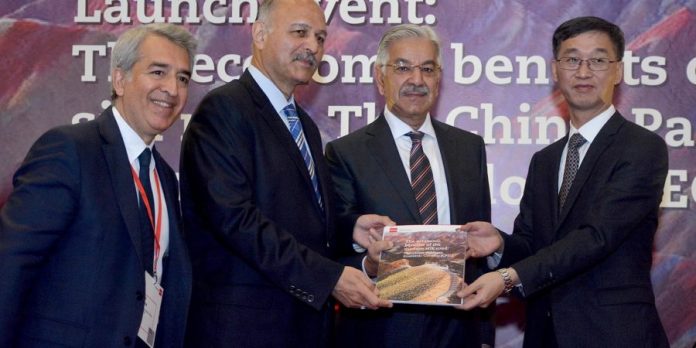 ISLAMABAD, MAR 01 (DNA) – Senator Mushahid Hussain Sayed Chairman Parliamentary Committee on CPEC termed the China-Pakistan Economic Corridor (CPEC) as future of this region adding all impediments and bottlenecks coming the CPEC way shall be tackled with effectively. Mushahid Hussain Sayed was speaking on the occasion of launching of “The Economic Benefits of the Modern Silk Road – CPEC report.

He further said CPEC is there and we have to take it forward despite all odds. He particularly talked about Thar area where CPEC had already started yielding results.

He said it was quite a soothing experience to drink tap water in Thar area, which otherwise was a distant dream. It all happened because CPEC has become fully operational in that area.

Senator Mushahid said the women of the Thar area now are also playing an active role in day to day affairs. About 28,000 women are now driving heavy duty bulldozers, and undertaking mining jobs, which for sure is a revolutionary change, keeping in view the backwardness of the area in the past.

Mushahid also dispelled the impression that Chinese labour would flock to Pakistani markets adding a Chinese labourer gets Rs 80,000 in China while in Pakistan he would get only Rs 20,000 to 30,000 so why he should come all the way from China to Pakistan to earn a meager amount of money.

He said such propaganda is being made external factors also and India being at the top. India ostensibly does not want CPEC thriving in Pakistan therefore they are hell bent upon creating misunderstandings about the initiative.

He made it clear all such nefarious designs of anti-CPEC forces shall be dealt with sternly and resolutely.=DNA