ISLAMABAD, NOV 15 (DNA) – First formal meeting of Pakistan Romania Forum(PRF) was held at the residence of President of the Forum Zahid Maqbool, with Ambassador of Romania Nicolae Goia in the chair.The Romanian ambassador welcomed the establishment of the Forum and hoped it would work earnestly for promotion of bilateral as well people to people contacts. Ambassador Nicolae Goia further said there was still room in terms of promotion of bilateral relations adding during his stay in Pakistan he would try his best to bring peoples of both countries even closer.

The ambassador was of the view bilateral ties could be strengthened by intensifying people to people contacts. He said the Romanian embassy‘s entire staff was available round the clock to facilitate all efforts meant for cementing of ties. 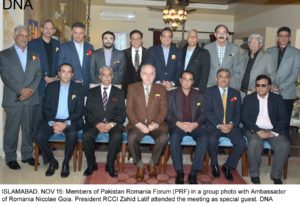 He said trade and economy was yet another field that can boost bilateral cooperation. Currently the trade volume between the two countries may not be up to mark therefore we have to put in some extra efforts to achieve immediate and durable results in this field.

He said Romania offered huge business opportunities to businessmen. During his visits to various chambers of commerce and industry and interactions with the members of business community he gave detailed briefings about different avenues of cooperation that existed between the two countries.

He called upon the PRF members to work wholeheartedly in order make the Forum a serious and result-oriented body that could play an effective role in promotion of bilateral relations.

President of the Forum Zahid Maqbool, in his remarks assured the Romanian embassy that the PRF would live up to the expectations as it is composed of serious and mature people hailing from various walks of life.

He further said all efforts shall be made to convince Pakistani businessmen to go to Romania and explore business opportunities there.

He also welcomed President of Rawalpindi Chamber of Commerce and Industry Zahid Latif who attended the PRF meeting as a special guest. The President RCCI announced to take a business delegation to Romania in the beginning of next year.=DNA