SLAMABAD, OCT 26: (DNA) – Ambassador of Romania Nicolae Goia has said there existed excellent professional relations between armies of Romania and Pakistan adding this year the first Romania-Pakistan joint military committee meeting took place in Bucharest. The next meeting, he said, shall take place in Pakistan and this is the only one example of the many facets of collaboration in the military filed. The Romanian ambassador expressed these views while speaking on the occasion of armed forces day of Romania.

The Romanian ambassador further said, presently Romania’s army takes part in various international peace keeping, combating terrorism and humanitarian missions in the most difficult and sensitive areas of the Planet. We are proud that two Romanian officers are currently serving in UNMOGIP. 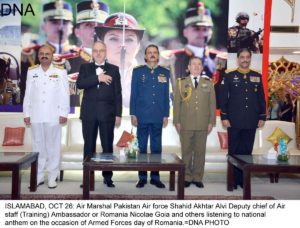 Ambassador Nicolae further said October 25 is an important day not only for the Romanian army but for the history of Romania as well.

“ Exactly 73 years ago while the European continent and the world at large were trapped in the nightmare of the Second World War, the most devastating global conflict in the history of the mankind, Romanian Army had liberated the last inch of the national territory from the foreing ruling and alien administration.

He said, the liberation of the entire territory of Romania was achieved by the heroic fights of over half a million of fully employed troops, many of them paying the ultimate price.

“ The loss inflicted to the enemy and the magnitude of my country’s participation in the war against Fascism alongside the United National powers for the liberating not only the territory of Romania but also of Hungary, Czechoslovakia and Austria throughout the final victory, had significantly shortened the WWII spared a huge number of lives and prevented a great deal of further destruction and material loss on the continent”.

The ambassador added, jumping over the decades, today Romania, is a security provider in the region and its army operates at the highest NATO professional standards, protecting our European democratic community of values.

The proximity of the Eastern border fo the Europ Atlantic space makes Romania both a gate locker and a stragegic opener of the roads.

The multiple threats to the global security, terrorism above all, makes cooperation between all peace loving countries in the world in confronting the menaces of extremism of all kinds, more critical and necessary then in many other moments of the history, he concluded.=DNA