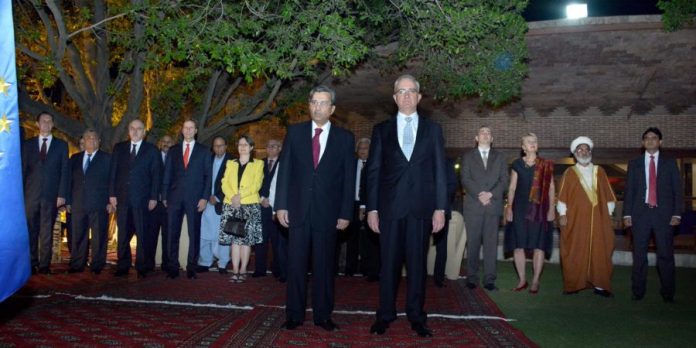 ISLAMABAD, OCT 13 (DNA) – Ambassador of Spain Carlos Morales hosted a grand reception to celebrate national day of Spain. Federal Commerce Minister Pervez Malik was the chief guest. The ambassador while speaking on the occasion said, politically, we have held three rounds of bilateral consultations at Foreign Secretary level in the last three years. The next one is scheduled for early next year in Islamabad. As a member of the EU we also actively participate and engage in the wide range of European Union-Pakistan dialogues, as the Joint Commission that has been taking place in Brussels this week.

Ambassador Carlos further said, “our bilateral trade has more than doubled in the last years, from less than 500 million US dollars in 2010 to more than 1.2 billion dollars in 2016. Spain is now the sixth market for Pakistani exports in the world”.

Pakistan he said exported almost one billion dollars to Spain last year. Nonetheless, it is necessary that Pakistan diversifies exports beyond textiles, if we want to consolidate these gains in the coming years.

“We have been encouraging our companies to explore trade and investment opportunities in this country. To that end, last month a new trade office opened at our Embassy in Islamabad.  We mean

business, particularly at this moment when both the security situation and the business climate in Pakistan have significantly improved”.

For instance, Spanish retailing companies are opening new outlets in malls all over Pakistan to cater for an ever-expanding middle class.

Tourism industry he said is another area where we can work together. Spain is the second country in the world in tourism revenue and the third in number of visitors.

“Our cooperation in this field is set to increase as Pakistan’s security situation improves year after year, domestic tourism grows rapidly and international visitors come back”.

Some of these visitors have developed close bonds and at least two Spanish NGOs are operating right now in those areas in the field of community development.

He said, over a hundred thousand Pakistanis live in Spain, connecting our societies and providing a better understanding between our people.

Only in Barcelona, there are now up to twelve all-Pakistani cricket teams as well as journals and radio stations in Urdu.

People to people contacts is another area of special interest. For example, Universities and Business Schools from both sides are increasing their cooperation and exchanges.

As a result a growing number of Pakistani students are pursuing their post graduate and doctoral studies in Spain. =DNA